Diet fads are exhausting. The latest and greatest diet crazes have become a virtual staple of today’s pop-culture. If you want to fit in and be able to contribute anything to the conversation among friends or coworkers, you had better know the gist (or at least the name) of the latest seven or so diet trends.

I’m as frustrated as you are, but I would also argue that the combined trajectory of the last decade or so of nutritional research seems to be pointing in a generally unified direction. At least in terms of body image, carbohydrates have become a near-unanimous nominee for food source most likely to add to our waistlines.

But our brains? For some reason we’ve always viewed our brains as a fixed quantity. Either you’re born with a great big powerful one or you’re stuck a shriveled lump of genetically-mutated neurons and synapses destined for disease. You were born with ADD or you weren’t. Your family’s predisposed to Alzheimer’s or they aren’t. Or not?

Those assumptions may not be true at all according to a relatively new book by Dr. David Perlmutter called Brain Grain. In fact, despite the dire warnings in the book about how dangerous our eating habits have become, Dr. Perlmutter makes a compelling case for being able to reprogram our body’s cells to become the disease-fighting brain superchargers they were originally designed to be at birth. 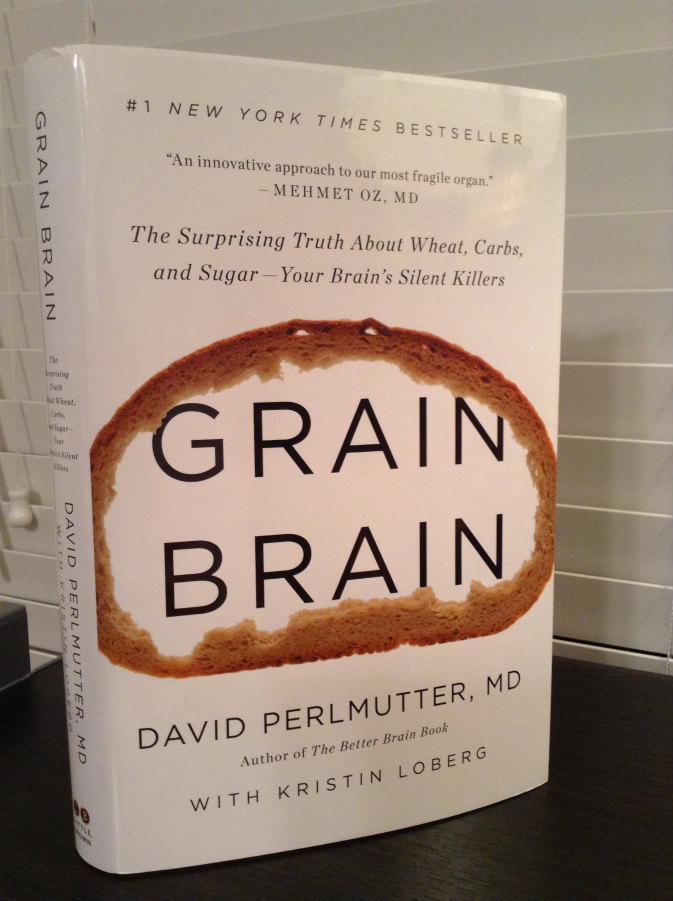 A Breadly Assault On Your Brain

First, I make no apologies for great puns.

In Brain Grain, Dr. Perlmutter begins by suggesting that virtually all human beings are allergic, at least neurologically, to gluten. Specifically, the presence of gluten leads to the production of  inflammatory cytokine chemicals—small proteins that modify cellular behavior and damage precious brain tissue. Elevated cytokine levels have been linked to neurological conditions such as Autism, Alzheimer’s, and Parkinson’s disease.

In essence, what is generally regarded as an intestinal condition, gluten sensitivity is likely a fact of life for all human beings to some degree, even if doesn’t manifest itself through irregular bowel movements or abdominal discomfort. What might begin as a simple headache, inability to focus, or other reduced cognitive functions could actually be the first symptoms of a brain under the toxic assault of gluten.

Rather than be prescribed a chemical to manage your symptoms, you might be better off just changing your diet.

The presence of gluten in our foods has exploded over the past few decades. Even in foods where gluten is not naturally present, food manufacturers have added it because, well, we crave it. So-called “comfort foods” like the ones below are likely to be jam-packed with gluten:

Why do we crave gluten? It’s actually pretty scary, but gluten breaks down in your body to become an intoxicating blend of polypeptides that can cross the blood-brain barrier and attach to the brain’s morphine receptor, producing a kind of natural high.

So if you’re anything like me and feel fantastic and at peace during the few short minutes after consuming a cream-cheese laden bagel or five, only to crash a few hours later, you now know why.

Dr. Perlmutter goes on to identify a second culprit in bodily inflammation—blood-sugar spiking carbohydrates such as starchy vegetables and fruit. Diets packed with high-carbohydrate foods such as potatoes, corn, rice, and fruit can lead to dangerous spikes in blood-sugar levels that contribute to a process called glycation which can shrink brain tissue.

If that seems antithetical to just about every major government study of the past several decades, it is. According to Dr. Perlmutter, “In 1992, the U.S. Government endorsed a high-carb, low-fat diet. The American Heart Association and the American Diabetes Association followed suit with similar recommendations in 1994.” The corresponding graph shows the rate of diabetes sky-rocketing beginning shortly thereafter, perhaps as a result of people heeding the advice of so-called experts in the government and medical communities.

Let’s face it, it wouldn’t be the first time the FDA was wrong about something.

It might seem difficult to grasp, but a high-fat, low-carb diet more closely mirrors the diets of our hunter-gatherer ancestors whose genetic disposition to foods we still carry. The percentage breakdown of our ancestors’ diet looks something like this:

Compare that with today’s human being:

The obvious concern then becomes one of heart health. With diets so high in cholesterol, won’t the risk of heart disease necessarily go up? Not according to Dr. Perlmutter. In fact, the majority (75-80%) of cholesterol present in our bodies is produced within and does not come directly from the cholesterol we consume.

It’s nothing short of provocative, but Brain Grain is worth a read, and it may just save your life.

Editor’s note: Links in this post for Brain Grain are affiliate links, which means a small percentage of any sales made go to help fund this website. Thanks for your support.
(Visited 94 times, 1 visits today)