After much foot-dragging, like say, twenty years worth, I’ve become a big fan of Apple products. To my left is my iPad Mini, from which I was just reading Tony Robbins’ newest book, MONEY Master the Game—very good. To my right is my trusty iPod Touch 5, which will turn two years old in a couple weeks and hasn’t missed a beat despite taking a beating. And in my lap is my Macbook, from which I am writing to you, my cherished reader.

I’ve gone from being an Apple hater to having my life inundated by all things Apple. Except, of course, the iPhone.

Avoid the hand grenades in your grocery cart

I think it’s safe to say that all great companies with great products or services have a line of products that are designed and priced to be worth every penny and maybe more. But all great companies also have a line of products or services designed and priced for suckers. And as we all know, there’s one of those born every minute. Our only hope is to try not to be one.

I’m a big fan of what I like to call the Grocery Store Revolution, much like the Hostel Revolution I’ve written about previously.

The Grocery Store Revolution has turned what I always considered to be a painful shopping experience for inferior products into a delightful experience with the best products in the world (and probably the healthiest, if you so choose). For now, it’s mostly an American phenomenon, but stores like Trader Joe’s and Sprouts offer amazing food and service at (mostly) amazing prices.

Even so, there are particular items at both stores which are so overpriced that I choose to procure them elsewhere for cheaper.

Like any smart company, they realize that if they can get you in the door with their great products and mostly great prices, you’ll be too lazy or hypnotized to recognize and avoid the select items with inflated prices.

Apple uses the same trick with incredible success. Namely, the iPhone. That’s right, I said it. 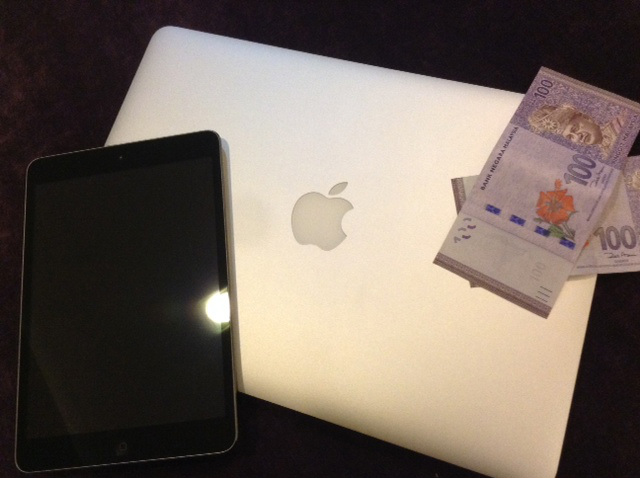 My recently purchased Macbook Air cost me around $1,300 dollars. That’s no small sum of money compared to most laptops out there. My PC-using friends thought I’d lost my mind paying that much. Truthfully, it is a lot of money. It’s more than I’ve ever spent on a computer, and it made me a little nervous (and rightfully so!).

But my Macbook is my primary source of income. With it, I own the means of production. With it, I can do anything I need for my business. It is like my entire office crammed neatly into a slim, sleek, and lightweight package. How long will it last? It’s my first one so I can’t say for sure, but fellow Mac users have told me I could use it for 5 years or more and it’d still function great.

Compare that to the iPhone, which many of us mistakenly believe to cost “$199.99” as the promotions so often say. Of course, that’s the price with a two-year phone contract. The people at GottaBeMobile.com have unpacked exactly what’s in that two-year contract for the new iPhone 6 here, and the numbers are staggering. According to their analysis, an iPhone 6 through Verizon will cost a minimum of $1,675 over the course of two years. For a phone.

Yes, I know, it’s a phone that does everything. And it’s true, iPhones are incredible little machines and in my opinion are the best phones on the market. But at the end of the day, it’s still a PHONE. Oh, and by the way, you’re likely to shed it after two years when it goes out of style and the battery is on its last legs.

Okay, so you might actually be a world class business person or celebrity of some sort who is in such high demand that the greatest (and most expensive) phone in the history of mankind is the only thing that will do. But you’re probably not. No offense.

wager that 95% of iPhone users will never come close to utilizing the full capacity of their pocket-sized super computers. So why foot the bill for one? There’s a number of options for being “iPhone-like” that give you access to great features like iMessage, FaceTime, etc., but without the two-year contract. Those include iPods, iPads, and yes, a Macbook. I use my iPod to do virtually the exact same things iPhone users do so long as I have WiFi. Well, that means just about everywhere these days.

So if you’re about to open your wallet for a brand new iPhone 6, take a step back from the ledge and check out some cheaper options. You might be surprised to learn about some of the alternatives that’ve become available in just the past few years. While you’re at it, check out my friend Mr. Money Mustache’s take on his cell phone company of choice, Republic Wireless.

In the meantime, spend wisely, my friends.