Have you ever been sitting, cramped and hungry, on a 12+ hour flight heading overseas somewhere only to realize you’ve forgotten to pack something? I haven’t, but that’s mostly because I tend to bring an entire medium-sized suitcase more than what I actually need. But I can imagine what it might feel like, and it’s not good.

The core necessities are pretty obvious. It doesn’t take a lot of research to know that you might want your laptop with you, clothes to suit the climate of your destination, and a visa to make sure you aren’t sent right back where you came from.

With a few expat stints under my belt—sometimes living in less-than-optimal conditions—I’ve discovered several items that have become invaluable to exist in environments both challenging and pampered. 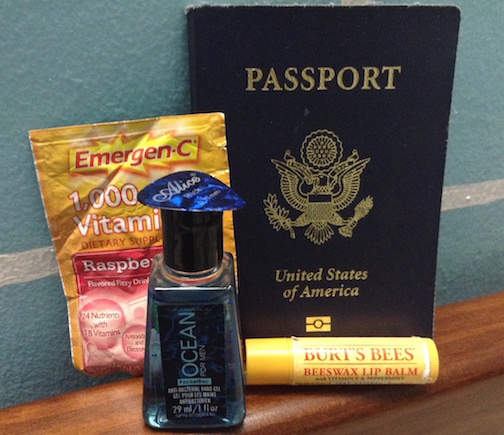 So, if you’re getting ready to head overseas for an extended period of time (Basically, longer than would be tolerable to be a tad uncomfortable and disconnected), the following list of Non-Essential Essentials might be worth consulting:

1. A Fantastic, No-Fee ATM Card (with a travel alert)

If you’ve ever spent any time changing currency at a money-changer in a foreign country, you might understand why Jesus flipped their tables over at Herod’s Temple in Jerusalem some years ago. Nothing says exotic vacation quite like hanging around janky, quasi-legal money-changer stalls. You don’t stand out a wink as the lone foreigner with the weird accent holding a wad of cash. If you’re lucky enough to not get mugged by a passing thief, you’re likely to get equally taken by not understanding the exchange rate.

But I digress. I played this game for several years traveling overseas trying to find the fairest money-changer. At first glance, it might seem better to bring stacks of dollar bills and have them converted once you arrive than pay outrageous ATM fees or risk having you card not be accepted. It’s not.

There is a solution, and a free one at that. The Charles Schwab High-Yield Investor Checking Account. And no, you don’t have to “invest” any money with Charles Schwab to get an account. This incredible free debit card comes embedded with an internationally-recognized chip, and Schwab will reimburse your ATM fees worldwide. I don’t know how they do it, but it’s an absolute steal when you consider how much of your budget gets drained from insane ATM fees.

ProTip: Don’t forget to call your bank and any CC providers to tell them where you’ll be traveling and when.

In case you didn’t realize it, the world isn’t quite as free outside of the good ole’ West. In the U.S., we enjoy pretty much unfettered access to the internet, but other countries are a bit more, shall we say, “Behind the times”. The Great Firewall of China is the most well-known government censoring program (Facebook, Twitter, YouTube, and numerous apps are banned in China), but plenty of other countries’ governments block websites that don’t meet their approval.

Additionally, many of the live-streaming websites you might enjoy at home like Hulu, Netflix, Pandora, and others are also inaccessible overseas.  In fact, you’ll be lucky to be able to watch highlights of Jimmy Fallon’s Tonight Show on the NBC website while in many countries. That’s largely because intellectual property protections are not yet in place in much of the world.

Your best solution is to get a reliable Virtual Private Network (VPN) that allows you to pretend you’re in the free world. They usually cost under $10 a month, but if you want a decent free version, the browser extension known as Hola Better Internet works pretty well.

Imagine arriving at your hotel in some faraway land, exhausted, with your phone or laptop battery on the verge of dying. You go to plug in your device to stay connected to home and realize the outlets aren’t suitable for your plug.

Believe me when I tell you that is an awful feeling that you want to avoid. Fortunately, the fix is simple and cheap, get a universal adaptor before you get on the plane. Yes, you will probably be able to find some version of a universal adaptor overseas, but the vast majority of them are poorly-made junk that will surely break way too soon. I know from experience.

Even though we have some of the least-demanding driver’s license requirements in the world, a United States driver’s license is viewed by most countries as proof-positive that you are an expert driver. I’m not sure why that is, but I’ll take it.

With that being said, AAA has somehow become the internationally-recognized arbiter of whether your specific license is worthy of an international permit. Don’t ask me why that is (An intense lobbying effort?), but before your U.S. driver’s license can be accepted overseas, you’ll need an additional permit from AAA. There is no requirement whatsoever apart from paying 15USD and providing two passport-sized photos.

Even if you don’t think you’ll have an occasion to drive while overseas, this is likely to come in handy. There’s a good chance you’ll want to rent a motorbike (may need additional motorcycle certification) or car, or you might have a generous friend who likes to lend expensive things free-of-charge.

I know, I know, paper books are better. I resisted the e-book trend for as long as I possibly could, but it’s time to get real when traveling overseas. You only have so many pounds or kilos you can haul for free without paying an extra bag fee, and physical books add up quickly.

Having books while far from home is important for mental health reasons. Apart from keeping your mind sharp, books serve as a cozy link to your native environment when culture shock sets in. For $100, you can get a decent e-reader and a few books to get started. It’ll save you a lot of weight in your bags that you’ll inevitably be lugging around everywhere.

I despise the term “backpacker”. For me, it elicits images of unshaven and otherwise unkempt 20-somethings sporting tie-dye t-shirts, Chaco sandals, and and the dreaded male capri pants. But for the long-term wanderer, a large backpack can be a lifesaver.

Here’s a wake-up call for everyone in the West, not every country in the world is wheelchair-accessible and equipped with functioning escalators, elevators, or even level sidewalks. If you’re traveling in a less-than-fully-developed country, you’re going to learn quickly to keep an eye out for mysterious dripping fluids from overhead buildings, sidewalks with potholes, and broken everything. I currently live in a country that seems to insist on using biodegradable material for the grates covering the storm drains that appear every 10 meters. I haven’t fallen into one of the thousands of gaping pits in the sidewalks yet, but I’m not counting any chickens.

What I mean is, your fancy pants suitcases with wheels that are so convenient in the West are an unwieldy physical burden in a lot of countries overseas. If you try to wheel them around everywhere, you’re liable to break the wheels clean off. A quality backpack might not be stylish, but you’ll be happy you have it when you get off the subway to see a giant escalator that isn’t moving.

If you are a business person or simply want to be prepared should disaster strike at home, a power of attorney document might end up saving you an emergency trip home to deal with something that requires your signature.

For the most part, there isn’t much that requires a wet signature these days to be official, but some of the most important legal or business documents still do. Having a trusted member of your family or a close friend with the ability to sign documents on your behalf can save you all kinds of time and trouble. If nothing else, it’s a convenient way to get things done that you’d otherwise put off until getting back.

If you live in the U.S., your State Attorney General’s office should have sample POA documents.

Not because you’re a CIA agent (Or maybe you are..), but a cheap and reliable SIM-capable phone can make your transition to a foreign country a lot easier. If you didn’t know, just about every country has SIM-based wireless carriers, and many of them are government owned or subsidized to which makes the service rather cheap. Instead of bringing a calling card, buying an international phone, or otherwise paying through the nose to call local numbers while in a foreign country, get a local number. SIM cards are incredibly cheap in most countries (I’ve gotten them for as little as $5), and it’s great to have a local number to give to people you meet along the way. But don’t forget to bring your passport to the wireless store.

Essential oils, 10,000% daily-value vitamin mixes, protein powders, facial scrubs, or other fancy stuff you use to either stay healthy or look good are a phenomenon of the West. Westerners often take for granted the fact that we have access to the absolute latest and greatest health supplements known to man, and for pretty cheap.

As a basic rule of thumb, any health supplement or beauty product you’ve discovered in the past five years is probably not available in most parts of the world—even places you think are developed and modern. While you can find many things in speciality expat shops, you’re going to pay through the nose, and even then you still may not find what you’re looking for. My advice: Pack a few favorite obscure items and wait to buy the basic stuff (deodorant, lotion) when you arrive.

10. A Credit Card With a Great Rewards Program

Last but certainly not least, if you’re going to be spending a bunch of money on a plane ticket and lodging, why not get some of the money back by using a good credit card? Some rewards programs are absolute travel game-changers when used responsibly. With normal spending rates, you could very easily pay for your flight to wherever you’re planning to go in just a couple of months.

While you’re looking for a credit card, don’t forget to get one that waives foreign transaction fees. And as great as American Express is, their merchant fees are too high for most of the foreign countries you’ll be visiting, so they simply aren’t accepted. Safe bets for making sure your card can be used anywhere and everywhere are Visa and MasterCard. At the end of the day, though, cash is still king in most of the world.