“Vote or Die” went one get-out-the-vote campaign some years ago. That seems a little extreme, doesn’t it? But even without the stark alternative of dying, is voting a necessary and moral thing for all people to do? I’m not so sure.

When I was young, I remember thinking how neat it’d be to be a brain surgeon. In a hospital saving lives, on the cutting edge of modern medical practice in the most daring surgical operation possible. Any brain surgeon must be a hero, I thought. What greater occupation is there than to serve human kind by saving lives through brain surgery?

But while I felt a duty to serve my fellow humans, and still do, I didn’t go out and start cutting open anyone’s brain who would let me. The truth is, I didn’t know how to remove tumors, stop a hemorrhage, or anything else related to brain surgery. And even if I did, I can just about guarantee I would’ve been too clumsy and ham-handed to be allowed near anyone’s exposed brain with a sharp object. I’d have passed out on the operating room floor at the first sight of blood and had my medical license promptly revoked for the sake of humanity.

In general, I think most decent people avoid doing things for which they lack skills when lives, or livelihoods, are at stake. Most of us don’t moonlight as firefighters or dabble in dentistry just because we’re arrogant enough to think we might be able to do it and be of some service.

So why would we encourage an all-hands-on-deck approach to voting? 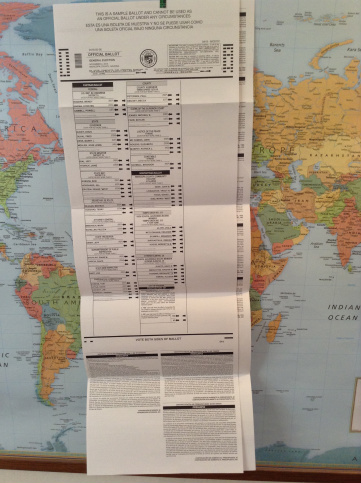 Now, don’t get me wrong, I wish everyone were more civically-involved. Damn it, we have the greatest constitution ever devised, yet how many of us can name more than a few things that are in it? Our elected representatives make decisions that affect virtually every waking moment of our lives, so it would behoove us to know a little bit about them and keep a watchful eye on them. No question.

Nevertheless, some people aren’t cut out for politics. Some people prefer to live their lives in peace without having to engage in the brow-lowering of modern day campaigns. Imagine that.

I’m okay with that. In fact, I enthusiastically support anyone choosing to live a life free of politics. I wish I were so lucky.

Do what you do best–that’s probably not voting

During Henry Ford’s infamous libel trial, opposing counsel repeatedly attempted to paint him as an ignorant and greedy industrialist with little understanding of current events or our nation’s political system. Indeed, Ford may have been so singularly focused on the American automobile that he was unable to speak intelligently on topics outside his specialty. But wasn’t it his right to be that way? And aren’t we better off as a country for Henry Ford’s focus and innovation? I’d say so.

Elections, for better or worse, determine what the quality of our lives will be in countless respects. They can determine how much money a family takes home from work every year, what their health care costs will be, and whether their sons or daughters will be asked to go to war.

Be informed before you exercise your civic muscles

Voting has serious, longterm implications, so it’s only fair that if you’re going to be making decisions that affect the lives of others you’ve never even met, you need to know what you’re doing, and know it well.

This year, if you’re going to fill out a ballot, only vote on items and candidates for which you can articulate a sound opinion with facts and foresight. Voting on things you don’t understand is no virtue, and abstaining from voting when you’re unprepared is no vice—so long as you contribute to society in other ways—like say, pioneering the $5 per day wage.