I’m confused. When I turn on the TV or read the newspaper, I hear about a society that sets unrealistic physical standards for women. Magazines and clothing brands are routinely boycotted for using photos of models that have been airbrushed too much. Even the most recent winner of The Biggest Loser has been criticized for losing too much weight and apparently setting a bad example for women.

In formerly polite society, I hear peers sneer and snicker about women they deem too skinny according to some arbitrary standard. The term “skinny bitches” is regularly bandied about among musical artists and other celebrities who would otherwise never use the latter word because it’s, well, disrespectful to put it lightly.

But America is also in an apparent tug-of-war with neighboring country Mexico for world’s most obese country according to some reports. The number one cause of death in America is heart disease—generally not caused by under-eating. So, where is this society that encourages women to be dangerously underweight? I’m not seeing it.

The #1 song in America today is “All About that Bass” by a not-airbrushed Meghan Trainor. In it, she refers to aforementioned “skinny bitches” and “stick figure” women—of one she is, proudly, not. We have clothing stores that cater specifically to “plus-sized” women in virtually every mall in America today. I’m not sure we’re quite as lacking in accommodations for non-slender women as we’re made out to be in the media. 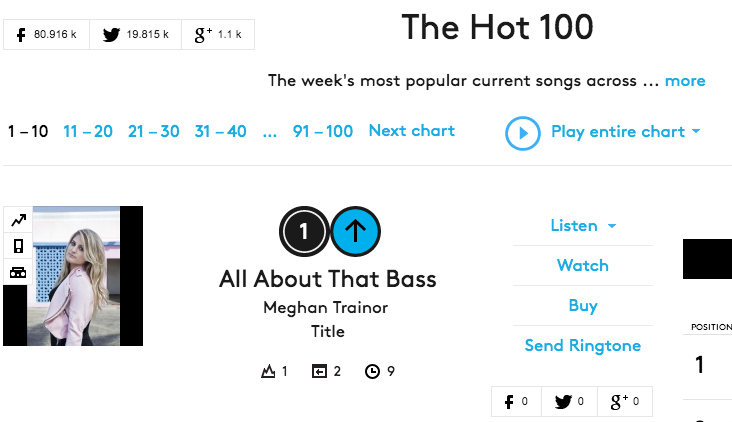 In fact, which women’s bodies get the most positive attention in our popular culture? Unfortunately there’s no Billboard Top 100 for that but I think I can take a pretty good guess at who it might be: Nicki Minaj (of “Google my ass” fame), Beyonce, Kim Kardashian, Kate Upton, Iggy Azalea. Before them? Try Jennifer Lopez or Mariah Carey. Are these women underweight? Are their photos airbrushed to make them appear to be? Do they struggle in any way to get on the cover of popular magazines? I think that’s a “No” on all questions.

So, while the CDC says that 34.9% of Americans are overweight, we seem to be waging a war against slender, fit women. Somehow, it became that if you exercise and eat healthy, you’re now on the side of “the man” and must be resisted in any way possible. This seems strange to me.

There’s no question that young girls and women (and probably men) should pay zero attention to magazines that present any human bodies in unnaturally perfect states. That’s not good for anybody. But maybe we shouldn’t be advocating the exact opposite and telling people to embrace their less-than-slender figures. After all, it’s probably not a good idea to embrace anything that will shorten your life. That goes for under-eating and over-eating, too.