Every generation has its inventor-heroes. They inspire us and better our lives by giving us exciting new tools for helping to cope with various aspects of the human condition. The inventor du jour who has seemingly stepped into the chasm left vacant by Steve Jobs is a 43-year old South African-born Canadian-American named Elon Musk.

While he is perhaps best known as one of the founders of the hip electric car company, Tesla Motors, Musk has also had his hand in a few other honorable mentions: SpaceX, PayPal, SolarCity, and the concept of a Hyperloop—a high-speed transportation system that would make modern subways look like steam locomotives—to name a few.

To say Mr. Musk is an accomplished inventor would be an understatement, but what’s unique about him is his ability to bridge so many ideological gaps with his entrepreneurialism. 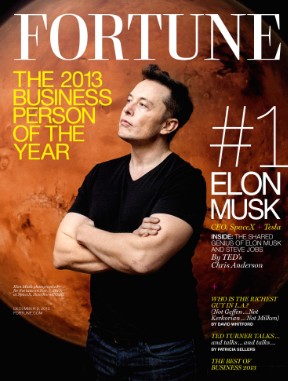 To wit: those upset with the federal government’s recent parsimony regarding NASA’s space program (just about everyone, Left and Right) are equally thrilled about the brash young inventor who is making a private sector push for deep space exploration.

One side of the political aisle considers solar power, electric cars, and other so-called “green energy” initiatives to be a waste of government resources on technology that has yet to reach economic feasibility. While another side views them as nothing short of humankind’s savior. The divide is stark, unless of course Elon Musk is spearheading those efforts via SolarCity and Tesla, respectively, in which case green goes bipartisan.

And California’s bullet train concept has become a favorite political football of the Right and Left who either condemn it for blowing gaping holes in government budgets or praise it for its “greenness” and efficiency. Elon Musk’s Hyperloop concept for mass transit, however, is a stroke of genius by America’s favorite inventor according to, well, everyone.

Fighting for the common man or empowering The Man?

I confess that I too have a soft spot in my heart for Mr. Musk. His companies make cool cars, launch rockets, and provide some much-needed creative destruction in numerous industries. What kinda guy wouldn’t like that?

Oh, he’s also worth an estimated $7.5 billion, which isn’t terrible.

But all the the while Musk is being hailed as a champion of the do-good little guy out to compete with monopolistic corporate polluters and visionless politicians, some of the precedents being set by him and his companies seem in reality to champion just the opposite—the empowered elite.

Charity for the rich and famous

Consider this: The minimum price of a new Tesla Model S stands at $71,070. Not exactly a car of the people. However, thanks to federal subsidies lobbied for in part by Tesla Motors, the super-rich can get a $7,500 rebate on their electric vehicle purchase. In California, thanks to added state subsidies, the wealthy few can shave a cool $10,000 off the price tag of their new Tesla. For reference, a brand new Mercedes E-Class Sedan will start at around $51,800. Still cheaper than a new Tesla even after considering the subsidies.

But hey, those subsidies go toward the purchase of all electric vehicles, not just Tesla’s. So that’s fair, right?

Not exactly. You see, Tesla isn’t just revolutionizing the type of cars we drive, it is revolutionizing the way we buy our cars too. Tesla, through a series of aggressive lobbying efforts, has secured legislative carveouts in a growing number of states to allow their model of direct-selling from manufacturer to consumer.

Freedom for me, but not for thee

That’s good news, right? This is the twenty-first century after all and we buy things online, direct from the manufacturer if it makes for a cheaper product (outlet stores, anyone?). True, that probably would be good, except that when Tesla secures its carveouts, it typically does so in a way that makes Tesla the only company who can truly benefit. You know, legislation that  reads something like “Car manufacturers whose name starts with a ’T’ and ends with an ‘A’ while rhyming with ‘Shmesla’ may sell direct to consumers, everyone else can go pound sand.” Those types of carveouts.

Tesla’s ongoing battles with various state auto dealership associations (read: cartels) angry at being cut out of the transactional loop have been well publicized. And Tesla’s efforts to roll back the good ol’ boy network of dealerships that refuse to allow any competition in their protected industry is actually a noble pursuit. But not when Tesla turns around and installs the identical types of legislative protections to which it purports to be opposed.

When it comes to Musk’s solar energy endeavors, SolarCity follows a similar pattern of seeking out protections and subsidies. Here again, the argument could be made that the net environmental or technological gain from said subsidies outweighs its obvious drawbacks. But at the end of the day, shouldn’t a billionaire like Elon Musk be allowed to go through the same entrepreneurial growing pains that 99% of the rest of America does—without a constant morphine drip of taxpayer-provided venture capital? I’m all for charity, but I can give you 7.5 billion reasons why Elon Musk doesn’t need any.

Every entrepreneur should seek out every legal advantage at his disposal, even stupidly-allocated corporate subsidies for the rich. But Musk crosses a line when he goes from taking advantage of established subsidies to actively pleading with the public to agitate for more handouts for his companies. In economic terms, we’d call that active rent-seeking behavior.

I hope SpaceX puts humans on Mars, I dream of one day seeing gas stations converted into cafes and eateries, and I can’t wait to never pay another electricity bill again. But I’m pretty sure the brilliance of Elon Musk and others like him is sufficient to accomplish those things through on their own merit.

Instead of one inventor leading virtually unchallenged in so many different areas, let’s blow the doors right off every industry and have ten inventors competing for our dollars in solar, e-commerce, cars-of-the-future, and yes, outer space.

At the end of the day, I’ve got a feeling the Elon Musk who has to compete on a level-playing field will inspire us even more than the one we already know so well.