The world has gone supplement-crazy. Almost overnight, nutritional supplements have become one of the fastest growing industries in the world. In 2012 alone, revenue from supplements was estimated at $32 billion and growing. It seems everyone is taking some kind of supplement these days, and the variety is nearly endless.

With growth like that, there are bound to be more than a handful of supplement-makers cutting corners on the quality and quantity of the ingredients that make up their products. Some, one would imagine, are just plain lying about what goes into their products, and giving us sugar pills in place of our organic echinacea or ginseng root. In people’s newfound excitement and belief in the benefits of natural supplements, many throw caution to the wind and opt for whichever brand is cheapest or most conveniently available. This is not smart, and I confess I’m guilty as well.

Enter the New York Attorney General’s office, riding, allegedly, to our rescue. In February, it announced the findings of its investigation into the ingredients of several natural supplement producers. To everyone’s shock, the AG revealed that only 21% of tested natural supplements contained DNA from plant species on its labels. Cease and desist letters were then sent to major retailers known to be selling the supplements in question. 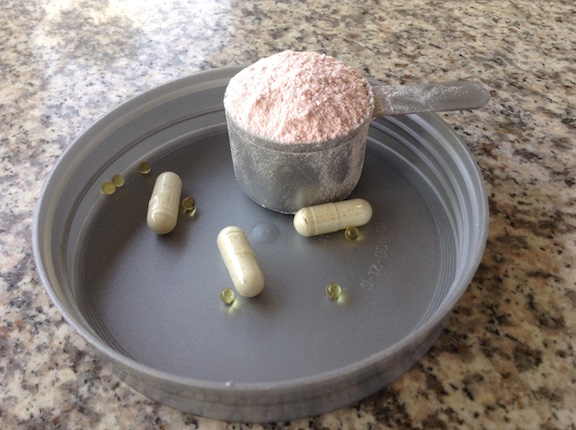 My own curious cocktail

This has, not unexpectedly, led to unbridled praise for the New York AG’s office, and calls for further investigations in New York and other states. That is, until now…

It turns out, according to non-laypeople (scientists), that the testing used in the AG’s high-profile investigation is not a reliable indicator for determining the composition of plant extracts.

The test used is called deoxyribonucleic acid (DNA, for the New York AG’s office) bar-coding, and the reason it’s unreliable is because plant extracts, by their very nature, contain little to no plant DNA. The extraction and purification process eliminates most DNA material, which might explain why only 21% of supplements contained such DNA. In fact, a cynical person (not me, of course) might suggest that the 21% of supplements which did contain plant DNA should now be under scrutiny for not using properly extracted herbs! Oh, what a tangled web we’ve woven indeed.

Seriously though, the nutritional supplement industry has grown so vast that there most likely are plenty of phony supplements being sold everywhere. That’s a shame, and most people would likely point their finger at the U.S. Food and Drug Administration (FDA) for not including natural supplements on its list of regulated stuff-you-voluntarily-put-into-your-body. Many will surely use the AG’s, shall we say “imperfect”, investigation to call for nutritional supplements to be regulated alongside food and drugs. To them I would ask, “How’s that working out for you?”

First, if you think the FDA is doing a fine job of making sure your food is perfectly safe to eat, I encourage you to Google News “food recall” and take a look at a few news stories. If you do, you’ll notice a lot of people are getting sick from FDA-approved food products, all the time. In fact, in most cases of food recalls, it’s the actual company itself, not the FDA, that initiates the recall. Most profitable companies know that reputation is paramount, and making people sick is a reputation-killer. Waiting around for the FDA to catch their mistake simply isn’t good for business.

But what accounts for such consumer recklessness with the types of things we throw into our bodies every day? Most people, before taking an action that might result in sickness or death, will do a little research first. These days it’s difficult to find someone willing to spontaneously try out a cafe that they haven’t previously studied on Yelp or UrbanSpoon. Yet consuming mysterious-looking capsules that supposedly contain beneficial root and leaf extracts? No problem!

For some reason, we’ve thrown caution to the wind with the food we eat and the supplements we take. My suggestion is that it might have something to do with a false sense of security provided by regal-sounding organizations like the Food and Drug Administration or the New York Attorney General’s Office. We assume, to our own misfortune, that everything we consume is safe, because “There’s an agency for that.”

As a result, we’ve made ourselves vulnerable to lies and abuses about the products we buy. Entrepreneur’s like those behind Consumer Reports and the growing multitude of hotel and restaurant review sites don’t see the glaring need for private food and drug review organizations. It is wrongly assumed that the need has been filled. So none exist.

Now, it appears that potentially honest companies with good products may be misidentified as crooks by the very agencies designed to punish the bad guys and protect us from ourselves. The trouble with our current situation is that we seem to have outsourced our own thinking to sometimes unreliable parties. The solution? Maybe it’s time we start doing our own thinking again.

Would-be entrepreneurs, are you out there?