Japanese-made cars are all I’ve ever known. From the time I first started driving at the age of 15  until now, all the cars I’ve had were made by either Honda, Toyota, or Acura (the luxury vehicle division of Honda). Until my 20s, all of them were made in the 1980s. Born in 1986, those were rather old cars for someone to be driving.

Surrounded by friends whose parents would often buy them newer, shinier American cars, I remember feeling jealous initially. A 1988 Arizona sun-baked four-cylinder Honda Accord isn’t quite what one might consider a “chick magnet.” I wasn’t doing the buying, though, so I kept my mouth shut and enjoyed free access to an automobile that could get me to places reliably. For me, it was an independence machine, and I’d probably end up with fewer speeding tickets driving an older, less visually-appealing car.

It didn’t take a lot of driving experience for me to realize just how lucky I was to be driving a Japanese-made car. Honda and Toyota are internationally-recognized as manufacturers of cars that withstand the test of time better than any cars on the planet. Before long, I could see the difference in quality between my secondhand Honda and my friend’s brand new Ford or Chevrolet. All it took for me to know was to open and shut the flimsy doors on the latter and listen to the unsure sound of the hinges and brackets to know. My biggest struggle was having to find Metallica and Led Zeppelin music on cassette tape because my cars never had CD players. Apart from that, I won on every category that counts, including miles per gallon.

Our family was known for buying several different used Hondas, Toyotas, and Acuras over the years. Often, they’d come with 150,000 miles or more on them before any of us sat behind the wheel for the first time. “Just breaking it in,” was my dad’s constant refrain.

A patriotic duty to waste money

In spite of the American flag hanging in our front yard, buying foreign cars sometimes elicited a quiet snickering about some perceived lack of patriotism from a family that didn’t “Buy American.” I found it rather odd as a kid, and still do today. “For the sake of patriotism, you’re willing to buy (and usually pay more for) an inferior product?” I’d say to the detractors. 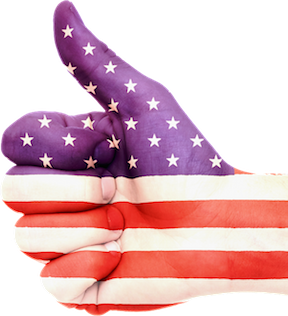 The “Buy American Act” was signed into law in 1933 by President Herbert Hoover, and it required government agencies to prefer U.S.-made products and companies in purchases. I’ve had the unlucky experience of being subjected to this law when flying on a handful of American government-sponsored international flights—always on a rather inferior American airline. You know the ones. The free wine comes out of a box, the food is prison-quality at best, and staff seem to always be in no mood to do paying customers any “favors”. Passengers are made to feel more like unwelcome and uninvited “guests” who staff are forced to entertain out of the goodness of their own hearts until disembarkation.

I suppose there’s a sweet intention behind the law and the spirit of buying American, but what does it say about us a nation? If an American product, whatever it may be, is so inferior that people need to be bribed and coerced into purchasing it, is it really worth saving? Moreover, in forcing or shaming people to buy an inferior product, do we risk prolonging the lifespan of bad products and companies instead of making room for newer, better American products and companies?

I’m proud to be an American. It affords me more privileges than any citizenship in the entire world. But I’m prouder of the fact that American products and services are typically of a quality that they can compete anywhere in the world, without strong-arming individuals and organizations to purchase them.

It saddens me that a few American products and services have become known as being inferior in quality. Yet it excites me for what new products and services could be coming to replace them if we just let them die natural deaths. That economic churning—what Austrian economist Joseph Schumpeter called “creative destruction”—is precisely the method by which American companies have risen to the top of the economic food chain. It’s also what enables the weakest among us from a standpoint of economic clout to compete with long-established giants of industry.

I’ll never purchase a ticket from an American airline for an international flight if I can help it. A half dozen or more Asian carriers far exceed any of them in service and even price. And I don’t foresee myself buying a Ford or Chevy vehicle anytime soon, it’s just too big of an investment to risk getting something of mediocre quality.

To me, the “Buy American” mentality is embarrassing. It is an all-too-obvious admission of inferiority, and the complex that goes with it. “Our guys can’t compete given the existing rules, so we’re changing the rules,” seems to be the rationale. It is a jingoistic act of self sacrifice that we can do without. Instead, we should let the chips fall where they may and if at the end of the day a foreign brand outperforms an American brand, we ought to tip our caps, buy the best product, and hope to beat them the next time around.

In the meantime, there are plenty of American products to be “proud of” if you feel that need. And the companies behind them typically aren’t asking that you be forced to purchase the products against your will.