My passport has seen better days. It’s fraying at the edges, there’s a wavy bend to the pages from being exposed to too much rain or humidity, and there’s an ugly circle-shaped yellow sticker on the back with foreign writing I believe to be Vietnamese, but can’t be too sure. I’d remove the sticker, but then I’d be left with the gooey, dirt-attracting residue which will look even worse than the sticker itself. I figure it adds to my passport’s character, anyway.

On the inside, the pages are speckled with what appears to be, and the musty smell confirms, a slowly growing colony of black mold. My visa pages where entry/exit stamps are collected and formal visas are attached by adhesive are growing fewer in number. There is just over a year and a half left in the 10-year lifecycle of my passport, and already I’m sad to see it retired.

It was June, 2007 when my passport was first issued. I got it almost entirely at the behest of my mom, whose foresight turned out to be as beneficial as it seemed crazy at the time. In my lifetime up until that point, I hadn’t traveled anywhere other than Mexico to visit a relative’s ranch, and in 2007 we didn’t need a passport to do so. I had no designs to travel abroad and didn’t understand why anyone else did, either. What use did I have of a passport?

Quite a lot, apparently. What existed for the first few years as a nightstand drawer novelty became, in the year 2011, perhaps my most indispensable tool of personal advancement. On the 13th of February in 2011, my passport was Christened with its first stamp: Hong Kong. 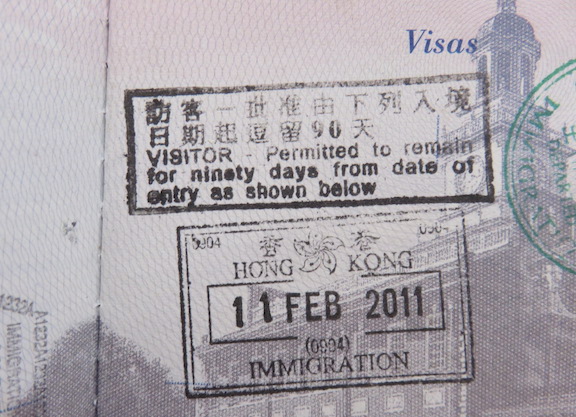 Somewhat miraculously, I haven’t been robbed or seriously injured on any of my travels. A few pickpocket attempts were thwarted in Kuala Lumpur and Bangkok. There was a roast duck in Guangzhou that set me back about four days and twelve pounds. And then there was the road rash from laying down my brand new motorbike on a coastline highway in rural Malaysia—Peta should thank me for avoiding the herd of goats. But I’ve walked away from any such incidents only a little worse for wear and with a new sense of caution that’s probably served me well since.

I’ve learned not to cringe when a friend looks at my passport photo, a Benjamin Button type shot of me that looks as though I’m stressed and haggard beyond my years. Being forced to pay $20 for a pair of 2” x 2” photos you’re given one chance to get right will do that to a person, I guess.

My stamps and expired visas, inanimate as they are, speak to me. They tell a story about where I’ve been and fill gaps in my memory about places and dates. For now, it’s a living document that changes as I change and is more complete than any journal I’ve kept.

What I’ll do with it on the day of its retirement, I’m not sure. But if I manage to keep it in my possession until then (*Knocks on wood*), I’ll give it the proper respect it deserves and place it in safekeeping for future reference. I may even shed a tear over having to part with it; one more drop of moisture on a water-damaged, travel-worn, and ink-laden passport I once thought I’d never use.

As an aside, and a way to keep this website up and running, check out these passport holders from Gate 18 Passports. I’ve learned over the years that it’s wise to keep passports, boarding passes, and other travel documents in an assigned location. The ones from Gate 18 Passports are high quality, look good, and make us a little extra money.