I guess I thought I was already pretty good on my motorbike. I’d put about 9,000km (5,592 miles) behind me in a little under seven months and I had a left side full of road rash scars from my first fall which was a constant reminder to be less of an idiot on the road. Melaka seemed doable.

My village was rural. And rural meant chickens, goats, sheep, cows, water buffalo, monitor lizards, and the occasional horse ran freely. My first week riding my bike, a pair of startled goats darting into the road sent me sliding across the blacktop for an acutely painful but non life-threatening lesson in rural motorbiking.

Google Maps estimated a 4 hour and 6 minute drive from my village on the east coast of Malaysia near Kuantan to the beautiful and historic port city of Melaka. On a 110cc Honda motorbike, it was fair to add at least an additional hour to account for topping out around 55mph. With an hour added to that for gassing up and getting something to eat along the way (rice, surprise surprise), I figured I’d be in Melaka in just under 6.5 hours. Door to door with no screw ups along the way, it was 175 miles from my side of the peninsula to the other, where Melaka awaited me.

Before committing to the trip, I ran it by the locals to get their impression of my level of insanity.

As a rule, Malays are too nice and gentle to tell you that your idea is stupid and/or impossible, even when it is. So, just as I anticipated, the reaction I got to suggesting I could take my bike all the way to the Strait of Melaka was something along the lines of, “Oh, that’s nice. You’ll take the bus. Much better.” I understood the message behind the varnish, but my stubbornness got the best of me, so I booked a nice guesthouse and gassed up the hog.

With my students getting out early for Friday prayers, I figured I could be on the road by 1:00pm and arrive in Melaka just as the sun was going down. It’d be a perfectly safe trip without having to ride through the dark, and I could get a comfortable night’s sleep before exploring Melaka’s historic streets in the morning.

The two-lane highway from Kuantan to Melaka is mostly surrounded by densely packed rainforest with a few small towns and plenty of oil palm plantations sprinkled in between. It’s windy and smooth and too beautiful for safe riding. It requires constantly reminding yourself to quit marveling at the lush green scenery whizzing by and keep your eyes on the road.

Oil palm trucks hauling the gargantuan maroon and orange palm fruit are too big for the narrow lanes and are dangerously unpredictable. They’re the last things you want to be near while straddling a tiny motorbike that would hardly be noticed crunching under the weight of a fully loaded palm oil truck.

I get on the road by 1:30, my usual 30 minutes past planned departure, and I feel good about the road ahead. Saved on my iPod are screenshots of the Google Maps I looked up on the internet at my home. My school-sized backpack is my only real encumbrance as I’ve shoved the few extra needed travel items in the small rear compartment on my bike.

Helmet on with long pants and long sleeves (a road rash lesson from before), I’m cruising and feeling optimistic. What could possibly go wrong?

An hour and a half into my six-hour journey, my bike goes wobbly on me. It’s a sensation I’ve never felt in the previous 9,000 kilometers of riding, so I slow down trying to maintain control and bring the bike to a stop on the grassy shoulder in the middle of the rainforest highway.

My rear tire is completely flat. Fortunately for me, I’ve stopped my bike only about 20 yards from a group of indigenous Orang Asli (original people). They’re selling wooden chopping blocks to passersby.

In Malay (not their native tongue), I ask the eldest of the group where I can get my tire fixed. Generously, he agrees to put his business on hold to lead me to a repair shop.

110cc bikes have small tires. So small, in fact, that they typically come with inner tubes, much like a bicycle. When a tire goes flat, it’s typically a problem with the inner tube.

Very slowly so as not to damage the wheel of my motorbike, the kind Orang Asli man led me down a small road coming off the highway to a hidden speck of a town I otherwise would’ve never known existed. The local mechanic couldn’t believe his eyes. How did this filthy orang putih (Malay for white person) find his way into trouble all the way out here? 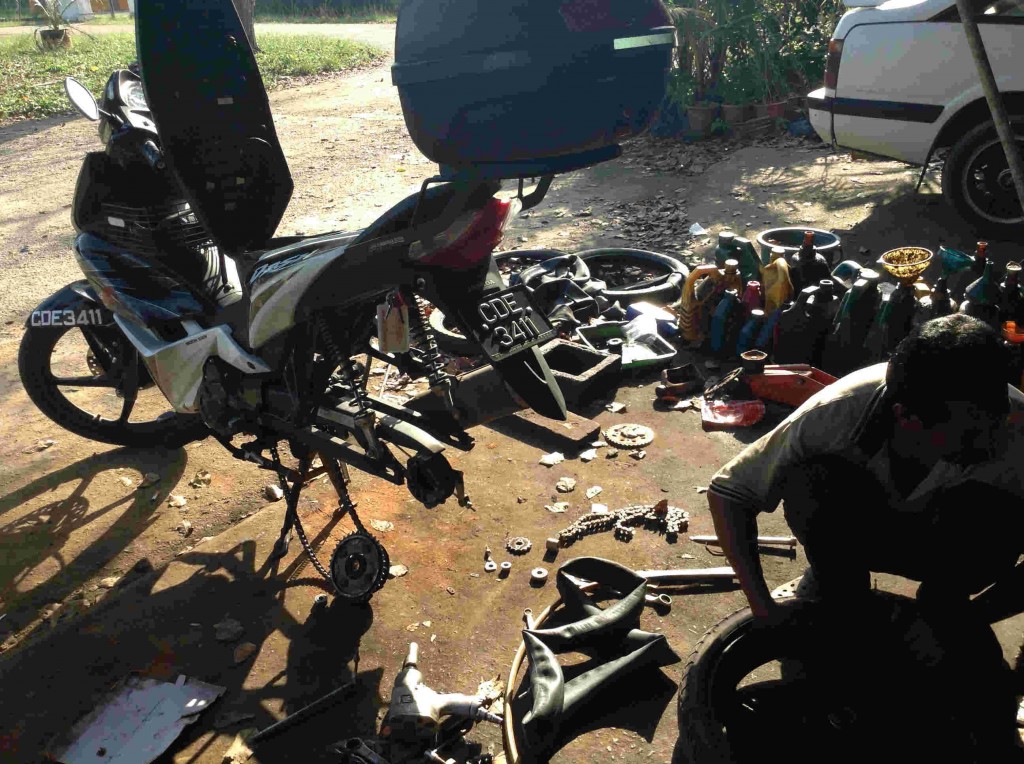 He promptly got started fixing my tire—the standard inner tube change. I purchased a cold Malaysian Red Bull (a far cry from the real thing) from his refrigerator to recharge for what just became a much longer trip. The damage was right around five American dollars for a cold beverage and an inner tube change.

Not wanting to waste anymore time, I dispensed with the chit-chat and hit the road. The ordeal cost me a precious 90 minutes and I now risked arriving after dark.

Flying down the road West towards Melaka, faster now than before, I felt good. My one glitch for the trip was behind me. I could breathe easy riding on a brand new inner tube in one of my tires.

Then, 45 minutes down the road, just after passing the sleepy city of Muadzam Shah, my bike went wobbly again.

Finding myself back on the grassy shoulder, I stared down at the same rear tire. It was as flat as can be. Twenty minutes at 20km/hr back to Muadzam Shah and I was at my second repair shop of the day. Dusk was beginning to set in and they were ready to close for the night when I showed up. 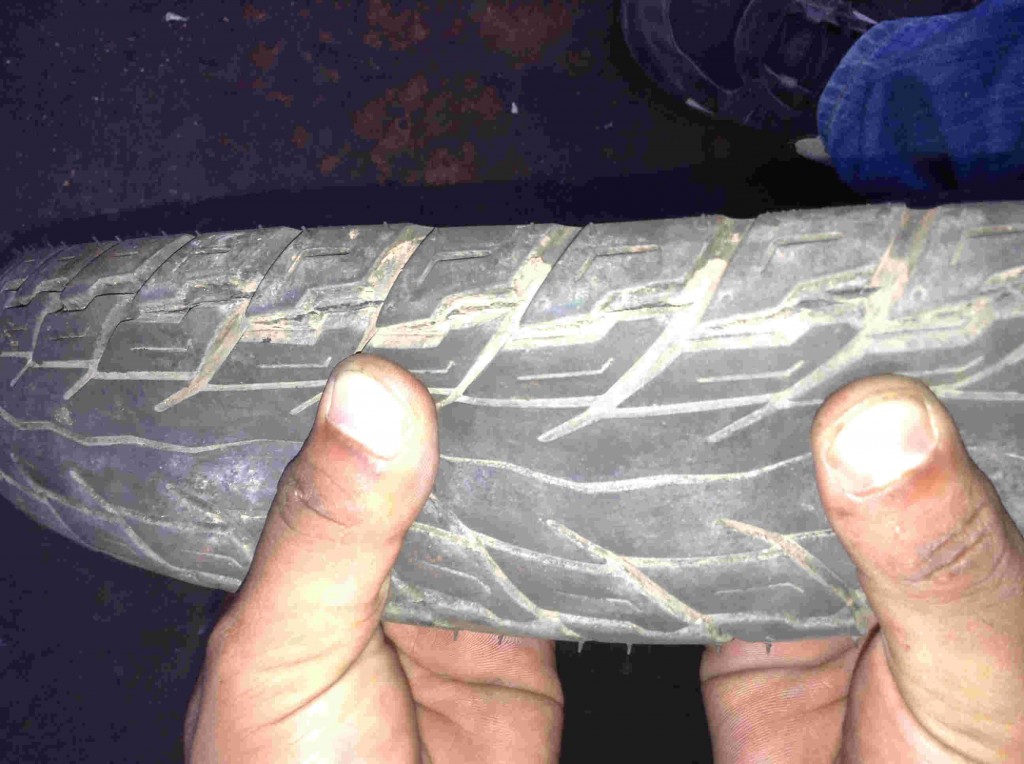 After explaining that I had just replaced the inner tube on the same tire, they took a closer look at things and noticed my tire itself had seen better days. Cracks had formed, and the heat from the friction of prolonged distances at 55mph was enough to rupture the inner tube. I was in need of a new tire, not just another tube.

So, with another hour of delays, I now had a brand new rear tire, this time a fancy tubeless one. I was hungry, but there was no time for food until I put some more miles behind me and got a few moral victories under my belt.

The sun was setting behind the hills and I was punch drunk and sweaty. After briefly considering turning back, I gassed up and got back on the highway, headed West.

I told myself it was only another couple of hours to my destination. I’d be over the worst of the drive by the time it was totally dark, I fibbed to myself.

With dark rain clouds forming on the horizon in front of me, things were about to get interesting again. In no time, I felt the first sprinkles on my knuckles and pulled over to suit up in my highly inadequate rain gear—a leaky two-piece plastic jacket and pants designed for a small Asian, not me.

Back on the road again, it was only a few minutes before the rain was coming down in buckets with lightning flashing across the night sky all around me. It was around 8:30 now and I predicted another two hours of this mess. I laughed at my sad predicament like a madman in the echo chamber that was my helmet.

It was no use trying to get there at a decent hour at this point, and the rain was forcing me to go too slow for comfort. I pulled over at one of the many roadside Malay food stalls along Malaysian roads to get some much-needed nourishment.

A soaking wet orang putih in the wrong part of town, I explained where I was headed and then surveyed the food scene. Not a lot of options as it was getting late. I settled for some rice and two pieces of fried mackerel.

By the time I finished eating, the rain had subsided to a drizzle. I bid my new friends farewell and rode off into the night.

At this point it was no longer enough to just point the bike West and hope for the best. I actually needed to pay attention to my maps and read road signs. This proved to be more difficult than I anticipated. Imagine that, Google Maps isn’t perfectly updated with the utmost precision for the windy backwoods roads of Peninsular Malaysia.

I was now flying almost completely blind despite being only about an hour outside of Melaka. I relied entirely on gas station attendants for directions, and I must’ve stopped at no fewer than five. I’d get directions at one, go five miles and feel that something was amiss, only to be told by the next gas station attendant that it was the opposite direction I was just told to travel.

Another couple hours of stopping for directions and making wrong turns, I found myself, luckily, in downtown Melaka. There, gloriously lighted in golden yellow were the arches of McDonald’s—a place I’d normally avoid while abroad, but the occasion called for some good old fashioned American gluttony.

I devoured a Big Mac meal while using the WiFi to recalibrate my directions and find my nearby guesthouse. Exhausted but grateful, I was safely in my beautiful guesthouse in Melaka no later than 1:30am, twelve hours after leaving my village for a planned six hour journey.

It wasn’t how I drew it up, but most good things in life don’t go exactly to plan. Sometimes, a pop quiz in living is necessary to make sure everyone is still paying attention. With patience and a little perseverance, humans can overcome a little rain and a couple flats to arrive at their true destination. When you do, the Big Mac and fries that await will taste better than they’ve ever tasted before.