When the Khmer Rouge marched into Phnom Penh on April 17, 1975, the weather was a little warmer than the unforgiving heat I experienced during my visit. Clad all in black, two-piece pajama-like uniforms with checkered scarves around their necks and rubber sandals made from car tires strapped to their feet, they marched to cheers from the crowd. After five years of enduring a complicated civil war and periodic skirmishes with Vietnamese military, the people were likely happy just to see a familiar-faced Khmer army seize control from what had been a corrupt government.

In 1975 Phnom Penh, elation quickly turned to panic as the smiling soldiers abandoned their charm and began telling people, with the aid of bullhorns and rifles, to prepare to evacuate the city. They hurried things along by telling residents that the U.S. military was about to bomb the city—a lie, but based on an all-too-recent reality in some parts of Cambodia.

Carrying what belongings they could, most people walked out of the city while the few people with cars inched along on the crowded streets. The capital of Cambodia was emptied of its human contents in one day.

It is said that two similar prophecies were made by Buddhist monks in the 19th and 20th centuries concerning this time, one of them reads: “A darkness will settle on the people of Cambodia. There will be houses but no people in them, roads but no travelers; the land will be ruled by barbarians with no religion; blood will run so deep as to touch the belly of the elephant. Only the deaf and the mute will survive.”

The plan of the Khmer Rouge communists was based on Mao’s Great Leap Forward. It was to make rural what had become urban, and to make agricultural and peasant what had become industrialized bourgeoise. The “great leap” was to symbolize the elimination of several steps in traditional communist theory to achieve the ideal communist society. It didn’t work, it never does.

The Khmer Rouge did this with all major Cambodian cities. They moved in quickly, with automatic weapons in hand, and systematically emptied urban centers, marching the people to rural villages unable to sustain the massive influx of humanity. Once they arrived, they were forced into near slave labor on struggling communal farms. 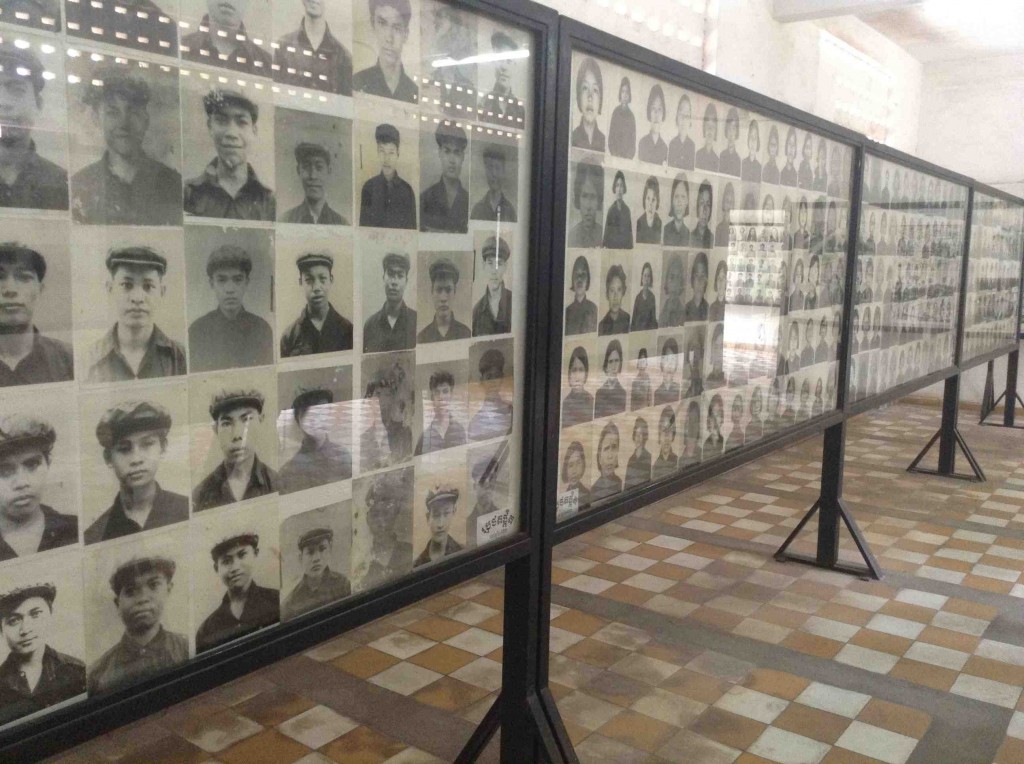 The original inhabitants of the villages, “the base people” as Pol Pot called them, were treated much better than the imported city-dwellers. Base people were peasants and thus embodied the model citizen for Pol Pot’s communism. Coming from Pol Pot, it was a strange twist of irony, all-too-common in communist regimes, where leaders are so often the embodiment of the very elitism they claim to oppose. Pol Pot, a Western-educated son of wealthy land-owning parents, was no exception.

From the communal farms, people the communists deemed threats were taken to prisons like Tuol Sleng where they were interrogated, tortured, made to write confessions, and murdered. Tuol Sleng was a school that had been converted into an interrogation and intermediary housing facility for people who had been marked for death. About two thirds of the complex was used for housing prisoners in bathroom stall sized rooms, while the other rooms were used for meetings and interrogations.

Like their Nazi predecessors, the Khmer Rouge kept impeccable records of the people they murdered. Photos were taken, and serial numbers were given to each prisoner. The women in the photos all have the same shortly-cropped hairstyle. After all, no one is to be different in communism, individuality is to be silenced.

Today, Tuol Sleng is furnished with walls of photos of its former prisoners, many with bloody or dirt-stained faces, betraying the struggle that took place as they tried to evade their captors. The prison has mostly been kept in its original condition, scarcely a mop has been dragged across the once blood-stained orange and white tiles. Black metal beds with shackles attached where the final dozen or so prisoners were found tortured to death still sit in their empty rooms. It is hauntingly unfiltered, unsanitized, and its middle-aged staff are a living reminder of a its all-too-recent nature, as virtually no one in Cambodia at the time was untouched, and everyone lost someone. 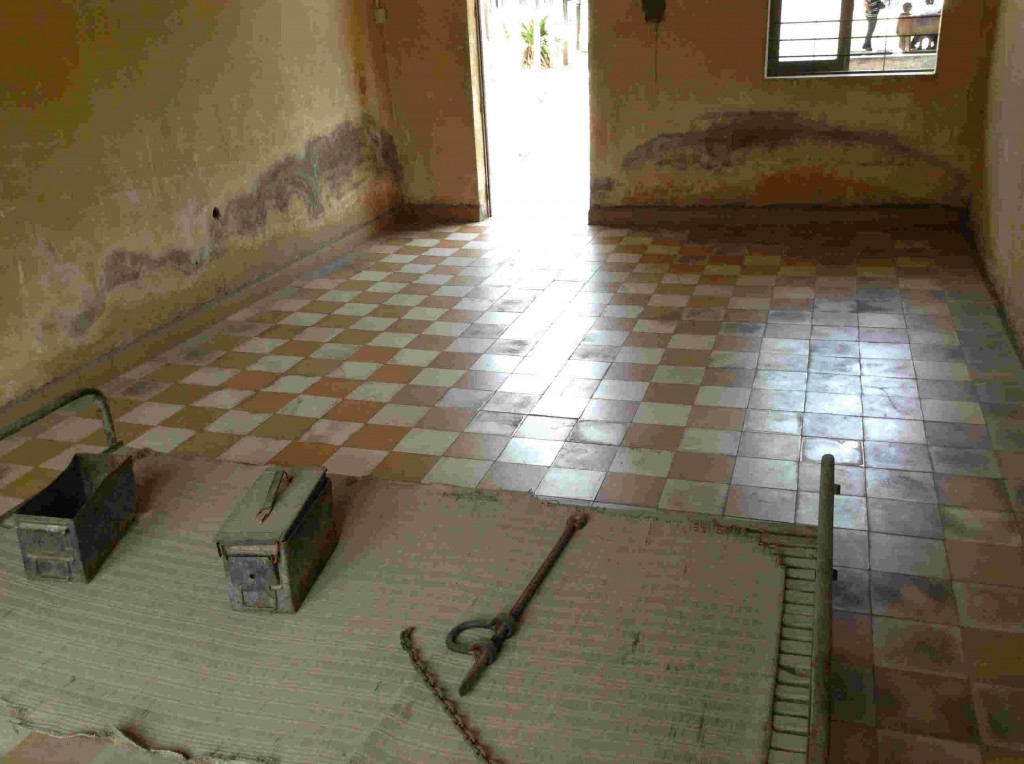 From Tuol Sleng, most people were eventually taken to Choeung Ek, the most well-known killing field. They arrived in a pickup truck, and were almost invariably executed the same night. At Choeung Ek, the Khmer Rouge soldiers played loud revolutionary music during the night on speakers hung from trees. The communist propaganda songs muffled the sounds of screams coming from their victims and kept secret the true nature of the military camp at Choeung Ek from the nearby villagers.

Blindfolded in the middle of the night, men, women, and children were marched to an open pit, asked to squat down, and were clubbed in the back of the neck, right where the spine meets the skull. It was almost always a fatal blow, causing prisoners to collapse into the mass grave amongst the other bodies. A soldier stood in the pit, slitting throats of those still moving to ensure they were dead.

Most of the skulls housed at Choeung Ek reveal this macabre truth with their relatively pristine condition. Few skulls have bullet holes or fractures, bullets were not to be wasted, and the fatal wound was usually the crushing of cervical vertebrae. For those too small to walk, a large tree at Choeung Ek was used to smash their skulls. Khmer Rouge soldiers simply grabbed them by their legs and swung them against the tree. There was nothing technical about the way the Khmer Rouge killed. Simple blunt force or starvation were the preferred means. Fortunate was the one for whom a bullet was used. 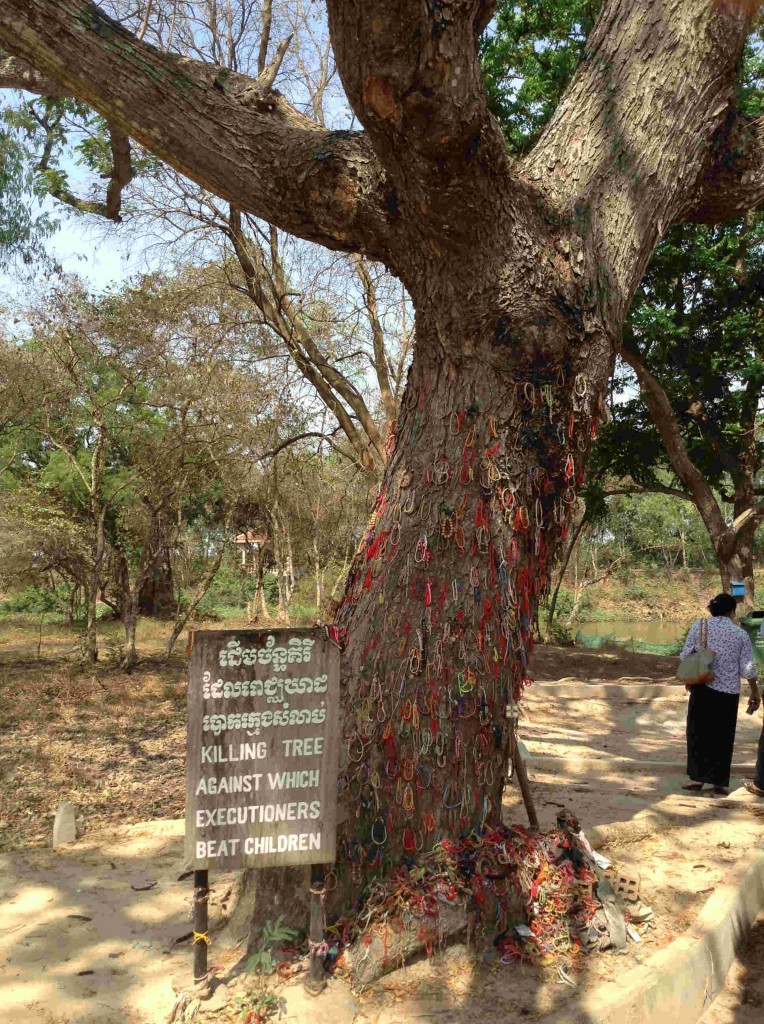 The bones of Choeung Ek

Choeung Ek is a sobering place to visit. To this day, human remains are piled in mass graves not far from the surface. Underneath your feet are fragments of human bones and pieces of clothing. During the rainy season every year, more bones and pieces of clothing rise to the surface and the bigger ones are collected by staff for housing in the stupa.

For the Khmer Rouge, crimes punishable by death included not just working for the previous government, but wearing glasses, having soft hands, long fingernails, or having anything resembling an intellectual background. Ironically enough, Pol Pot, the leader of the Khmer Rouge, occasionally wore glasses, probably had soft hands, and came from a highly intellectual background as he had studied and been groomed as a communist in Paris, France.

The Khmer Rouge regime was partly genocidal in that one of their many aims was the purification of the Khmer ethnicity. If you were Chinese or Vietnamese, your odds of survival decreased dramatically. It may have been French colonialists in Cambodia and Vietnam who first promoted the idea of race superiority there, as one colonial study suggested Khmers were an “Aryan race among Asians.” Pol Pot took it to heart.

The numbers vary, but somewhere between two and three million were killed during the five years between 1975 and 1979. Nearly one in four Cambodians died, most of them older men, leaving the country with far more women and young people today. 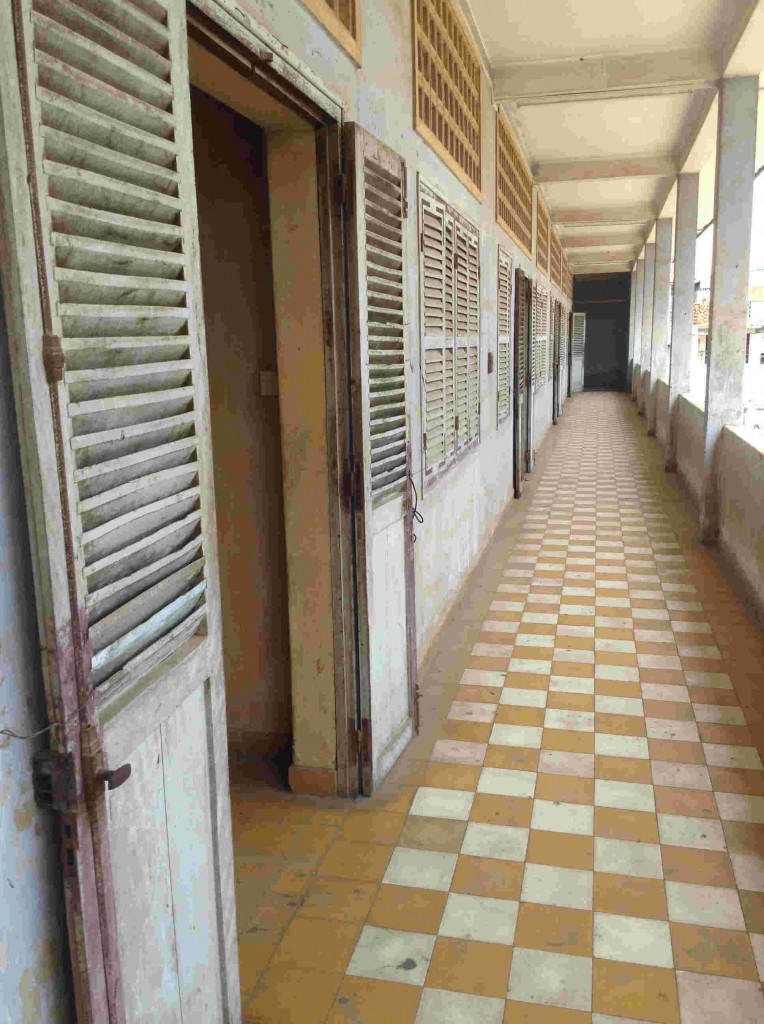 Outside of the killing fields, the Khmer Rouge littered the countryside with landmines, millions of them. In their haste to control the Cambodian people, they were not nearly as organized in laying mines as they were in documenting prisoners for the slaughter. As a result, single and double amputees are a common sight in Cambodia. And people continue to be injured by landmines in the countryside, though the numbers are declining.

I marvel at the Cambodian people’s spirit of resilience and good nature even to this day. Please visit this amazing country if you get the chance.