On April 19, 1968, my dad nearly didn’t make it home alive . Operation Delaware, as it was known, was a resupply mission to what the American military termed a “fire base” on top of a hill in the A Shau Valley of central Vietnam.

Piloting his UH-1 Huey helicopter pilot, he was shot down on the side of that hill, known to the Americans as LZ Tiger, in the jungle of Vietnam.

Forty-five years later, while living in Malaysia completing a Fulbright scholarship, I had the opportunity to spend some time in Vietnam and possibly retrace my dad’s footsteps. 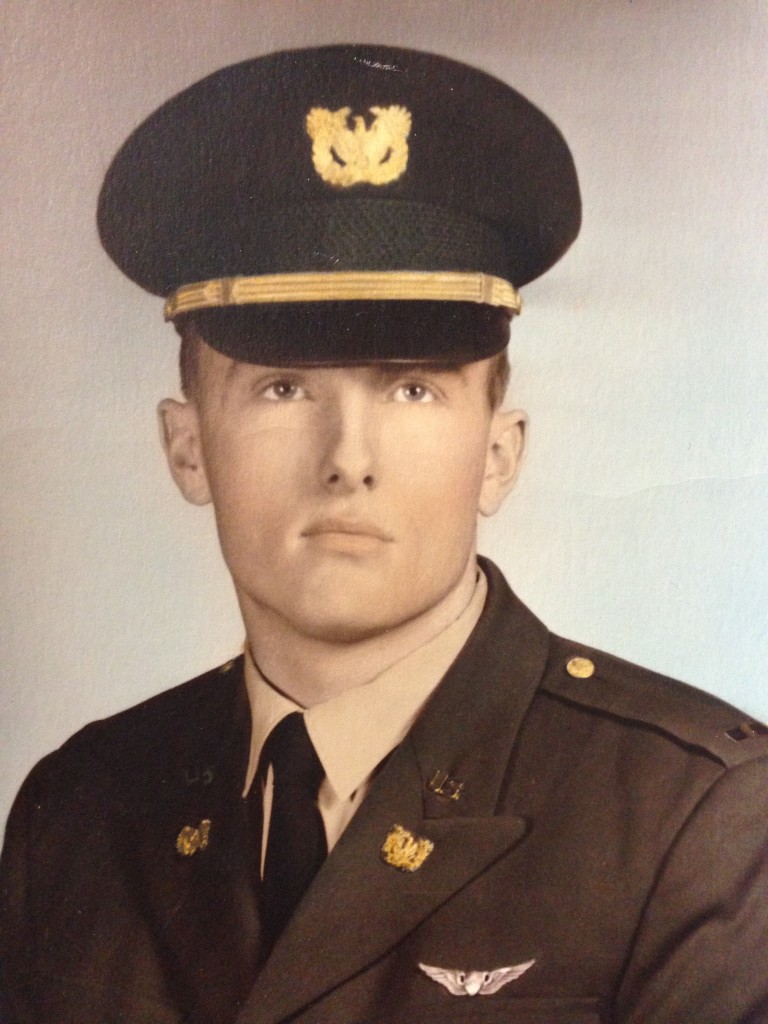 But where to begin? I didn’t have my dad in the right hemisphere to be my tour guide. I knew the name of a few bases he’d spent time at, and the name of that infamous hill where his Huey helicopter and too many good men met their final resting place. But those are names and places not known in peacetime parlance.

Priding myself on my “Google” skills, I began to hunt for a savvy tour guide near the central part of Vietnam where my dad was primarily located. I had high hopes that I’d be able to find the exact spot where my dad crashed and memorialize it with a photo of me standing there 45 years later—nearly the same age as my dad was. A truly one-of-a-kind Christmas gift, I thought.

Somehow, I stumbled upon a rave review for a guy named Tam in a small city called Đông Hà in central Vietnam. Tam was the owner of Tam’s Cafe and organized demilitarized zone (DMZ) tours led by former Army of the Republic of Vietnam (ARVN) soldiers! I was so excited that I rushed to call my dad to ask if he knew of Đông Hà.

Know of it? He was stationed there for a time.

I couldn’t believe it. Not only did it now seem possible to get the exact tour I wanted, I was going to be led by a former ally of my dad’s who fought alongside Americans during the war. I scoured that review and others for Tam’s contact information for hours to no avail.

Then, finally, I found it: tamscafe@gmail.com.

I emailed Tam and described exactly what I hoped to be able to see on a tour and asked if he thought it was possible.

I emailed my dad and asked for all the details he could remember about his two years in Vietnam.

Fast forward just a few short weeks, and I was arriving in the city of Đông Hà, Vietnam. Population: 82,046.

My friend Chris decided to join me for the DMZ tour, and our rickety old Vietnamese train came groaning into the Đông Hà station two hours later than expected at around 9:30am from Lao Cai in the north. Number of white people on board: 2.

Hoa, our ARVN tour guide and employee of Tam’s, was in sight the moment we stepped off the train. Within minutes we were on our way to Tam’s Cafe to have a quick breakfast before beginning our journey.

Within an hour of arriving, Chris and I were sitting comfortably in the air-conditioned backseat of an SUV driven by another employee of Tam’s, with Hoa sitting in the passenger seat.

Hoa’s knowledge of the places and events both minor and major throughout the entire Vietnam War was simply astounding. As we rode through the beautiful Vietnamese countryside, Hoa pointed out landmark after landmark that would make any Vietnam War history junkie giddy. If a particular sight interested us enough to stop and take a look around, all we had to do was say the word. 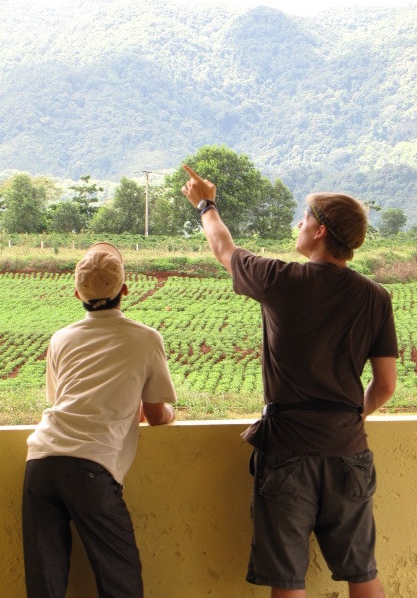 Among the places we stopped were The Rockpile, Hamburger Hill, Khe Sanh Combat Base, and the Củ Chi network of underground tunnels used by North Vietnam to smuggle arms and other supplies. We literally drove on the former Ho Chi Minh Trail for hours—the same Ho Chi Minh Trail my dad had bombarded with rockets fired from his Cobra helicopter during his second tour. 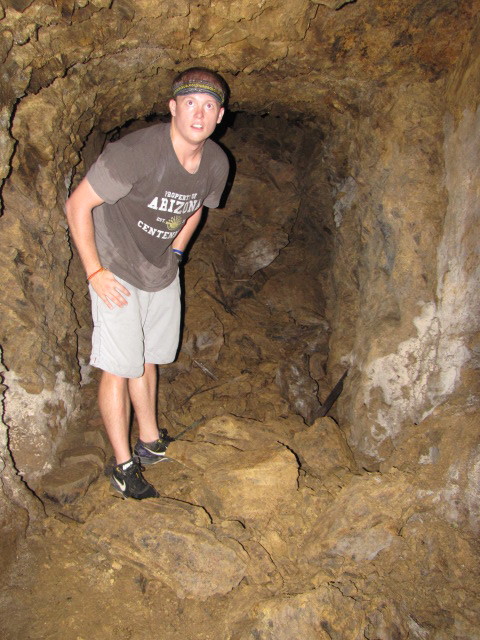 At Hamburger Hill, also in the A Shau, Hoa tracked down an indigenous female farmer who knew the area well to guide us. Relaying questions to her through Hoa, we found out that her ancestors were among those fighting for the North so many years ago. There I was, in formerly hostile territory, speaking to a descendant of the people my dad battled at LZ Tiger 45 years earlier. It was both an honor and a relief to meet now on different terms and be able to smile and laugh about the present irony instead of the past predicament. 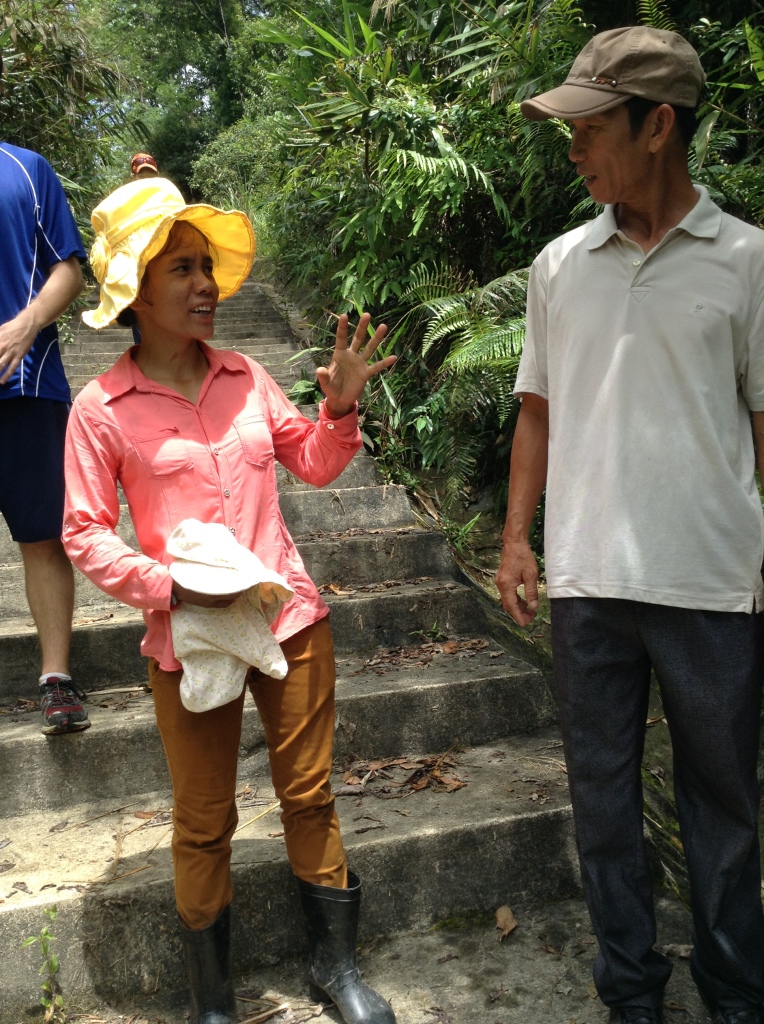 Hoa translating from the A Shau Valley local

When we finally arrived at LZ Tiger, the hill was bigger than I imagined. I struggled to picture the violent ear-shattering scene that seemed a world away in this now tranquil setting. A few photo ops later and the purpose of my trip was complete.

Having the opportunity to see and touch the places made famous to me by films and my dad’s personal war stories was positively surreal. To be witnessing it in the care of a gentleman like Hoa who fought on the same side as my dad was one of the greatest honors of my life and is something I will never forget.

All told, we spent two full days traveling with Hoa before ending up in Đông Hà for one last night. Tam and a friend joined Chris and I for dinner and a couple dozen cans of the eminently refreshing Huda pilsener from Hue, Vietnam.

If anyone is considering visiting Vietnam, go. Don’t hesitate. I dare say it is pound for pound the most beautiful place in all of Southeast Asia. And if you have even the slightest interest in American or Vietnamese history (and you should), email Tam’s Cafe and arrange a tour. Even if you don’t like history, there’s simply no better way to see Vietnam. 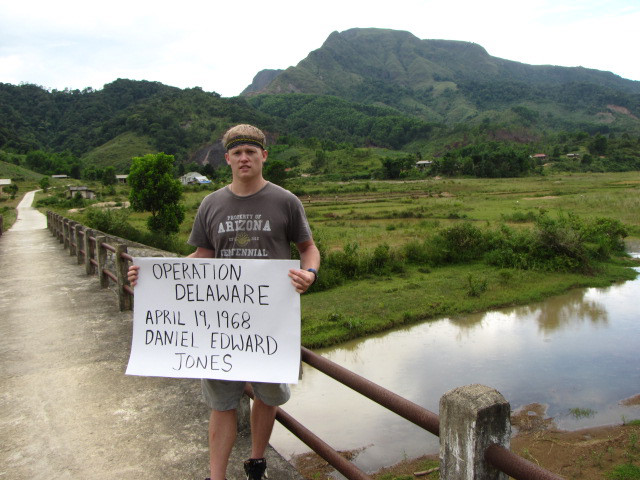 Me with LZ Tiger in the background

One final thought. Đông Hà and many cities like it are home to countless Vietnam War veterans who fought on the losing side and didn’t have a free country to go home afterward like American soldiers did. Many of them and their families are still punished and neglected by the government even to this day.

Rest assured there are no finer men on earth you could support with part of your travel budget. And in Vietnam, a little bit goes a long way towards having an amazing experience.

A lot can be said about the Vietnam War and the faults in how the U.S. government went about it. But one thing is for certain: We abandoned a lot of good people in their time of need. People who came to count on us and bet their lives on our promises of support. Truly, we are in debt to the resilient people of central and south Vietnam. Indeed, the entire country is full of beautiful people worth getting to know.

Visit the wonderful city of Đông Hà and let the city’s veterans show you a side of the war and of Vietnamese life you’ll never see in the movies. You will not regret it.