Recently, I had the opportunity to visit Cambodia. Not intentionally, I chose to go during Cambodia’s dry season. Let’s just say the heat was impressive (Phoenix, Arizona born and raised here…) It’s not the ideal time to go if comfort is your aim, but there are fewer people and it’s probably cheaper than the cooler rainy season. Dry season can be dusty, dry, cloudless, and just kind of ugly. During rainy season, I’m told it is absolutely lush and beautiful. Oh well, I didn’t really come for the natural beauty anyway.

Cambodia‘s two main “attractions” are the sprawling multitude of 12th century temples in Siem Reap up north and the Killing Fields near Phnom Penh down south. More on the latter in another post.

If you aren’t familiar with Angkor Wat, it is a massive temple made of sandstone that was originally Hindu, but later became Buddhist. Angkor Wat is just the most well-known of hundreds of temples spread out over untold miles that are known to exist in Cambodia. Many more likely existed at one time but were unable to survive the roughly 900 years (12th century) of degradation the way Angkor Wat has, or simply remain hidden deep inside Cambodia’s dense jungle. 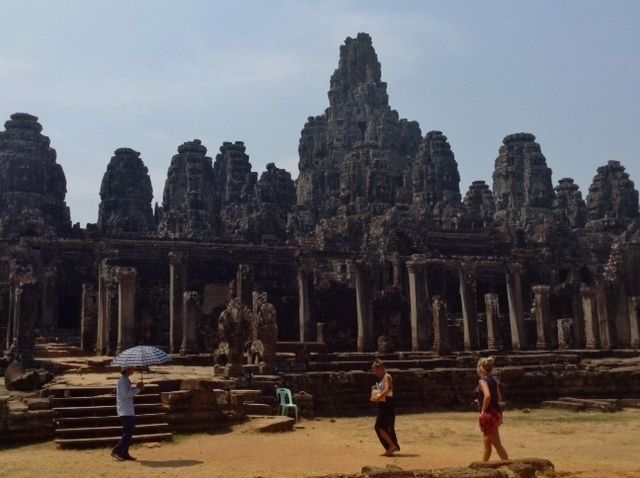 It’s easy to forget when looking at the intricate designs of these ancient temples that they are made of stone. According to archaeologists, the stones that make up Angkor Wat came from a quarry 56 miles away by one possible route, or 21 miles by another. Either way, the labor required to carry millions of stones weighing up to 1.5 tons across such a distance and then make something beautiful out of them is astonishing. 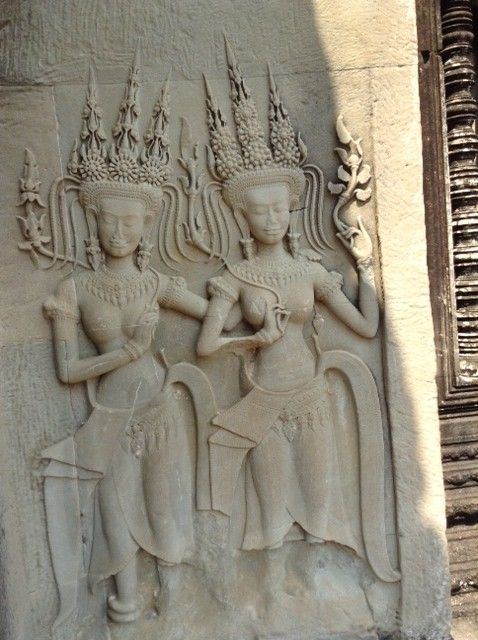 You’ll have to imagine what it looked like in its day, the sandstone has obviously been worn down over the years, creating a much more rounded appearance than the elegant sharpness of their original construction, but an amazing level of detail remains.

The lost history of the great Khmer Empire

By my judgment, there is very little known about Angkor Wat considering its religious importance to the Khmer Empire at the time and continued historical importance today. Most of what is known about the origin of the temple complex comes from the writings of a Chinese diplomat who visited in the 13th century. We know it was originally dedicated to the Hindu god Vishnu, and was later converted to a Buddhist temple as Khmer culture (and kings) shifted. Almost every inch of wall inside is covered with detailed carvings telling some ancient Hindu or Buddhist story. 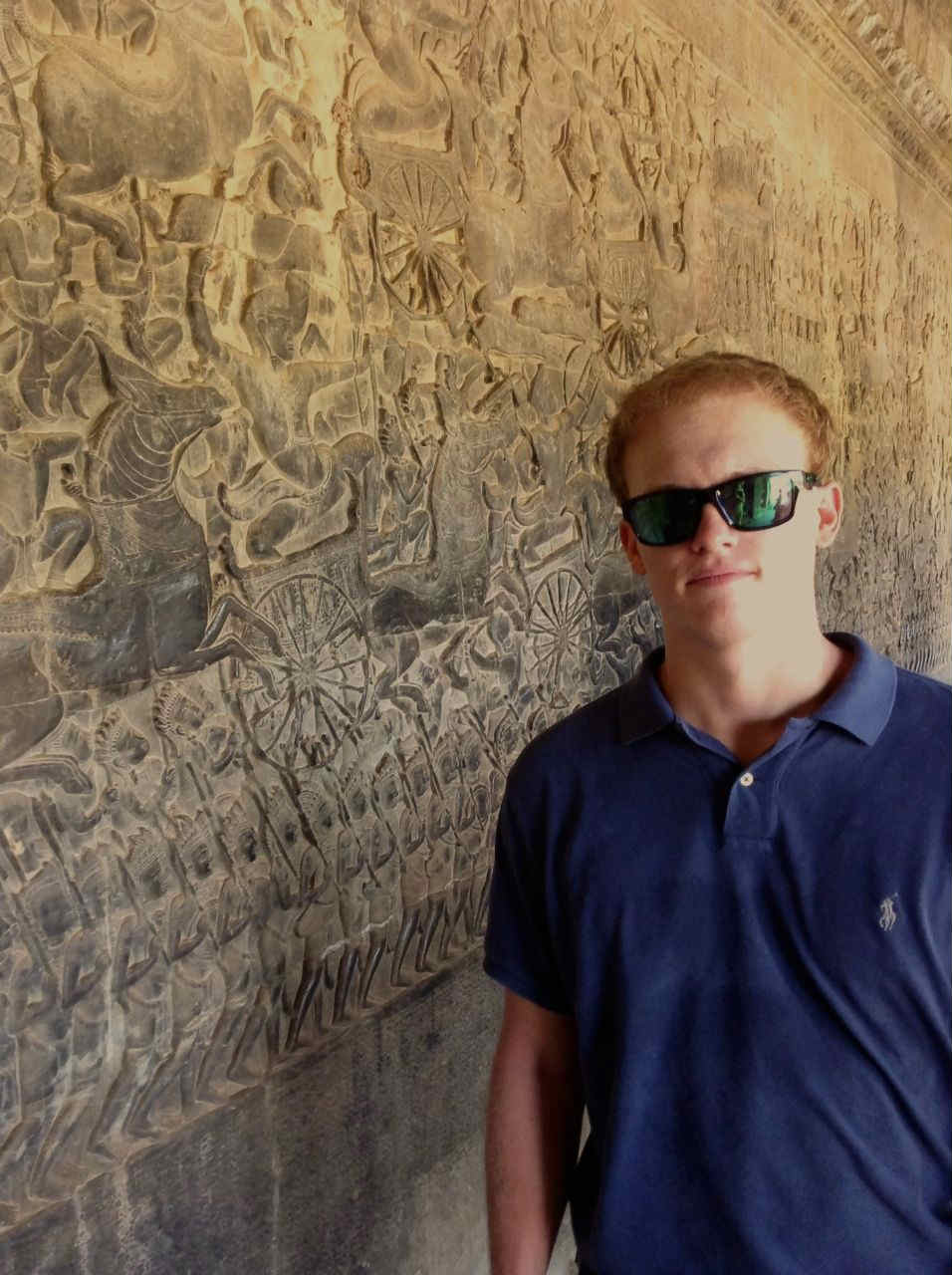 A contrast of empires

Maps of the Mongolian Empire at its most expansive during the 13th century suggest that Ghengis Khan would’ve just missed Cambodia and Angkor Wat, but we can only imagine what might’ve taken place had he and his warriors on horseback come across it.
The Mongolian Empire, emanating from modern-day China, was another major world power existing at same time as the Khmer Empire. In stark contrast to the mystery of the Khmers, the history of the Mongolian Empire is still known today in remarkable detail, yet the Mongols left almost no physical trace.
The Mongolian Empire, originally led by Ghenghis Khan, covered more land than any empire that has ever existed. The details of their way of life, religion, and laws are all known, often down to the finest of details. Ghenghis Khan’s life can be traced with relative precision all the way from his humble childhood to his death. Angkor Wat, though, despite its physical prominence, remains mostly a mystery, and no one is sure why that is. Perhaps the Khmer’s either didn’t write things down the way their more East Asian neighbors did, or the things that were written were somehow lost or destroyed. 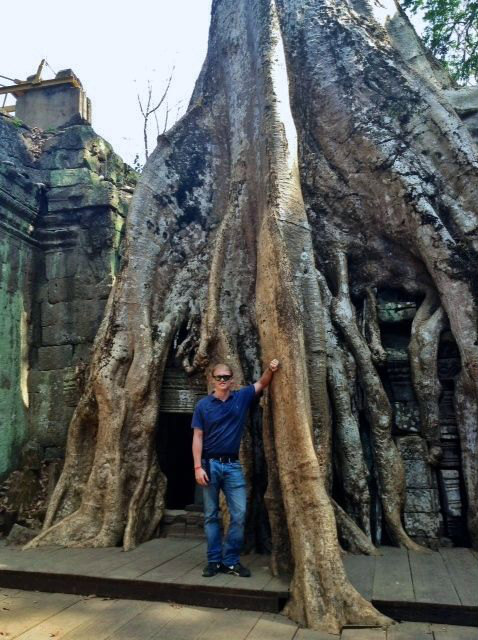 Whatever the cause, Angkor Wat was mostly abandoned for several hundred years, and when a French explorer “discovered” it in the mid 1800s, he attributed its construction to the Romans, not believing modern Cambodians could’ve pulled off such a feat. He was wrong, but he wouldn’t be the last to underestimate the spirit of the Khmer people.
Stay tuned for more on Cambodia, Phnom Penh, and the Killing Fields of the Khmer Rouge.
(Visited 321 times, 1 visits today)