A good underdog story is priceless. They never seem to get old and are often prone to embellishment. Underdog stories satisfy a part of the human consciousness present in all of us that craves reassurance from outside sources. We all want to know, despite our many failures, that success is still possible, even against great odds.

The Biblical story of David and Goliath is probably the most well-known and oft-told of all underdog stories, at least in the West. And for good reason, David’s improbable success in the Valley of Elah is a 3,000 year-old epic worth repeating. The story is so ubiquitous that Goliath, the name of the towering Philistine warrior from the City of Gath, has become synonymous with the word for “giant”. 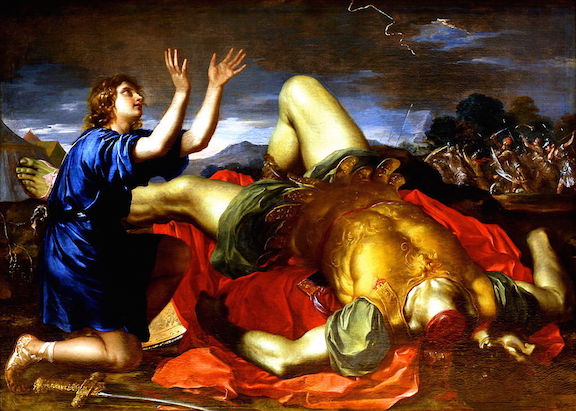 Malcolm Gladwell famously retold the story for a TED Talk not long ago and distilled it to uncover two profound truths about David and Goliath that have typically been overlooked:

As the story goes (with the aid of Gladwell’s accurate distillation), the Philistines, a frequent belligerent in wars against Israel during that time period, sent an army to split the Kingdom of Israel in two. King Saul of Israel responds by sending his army to confront the Philistines in the Valley of Elah, a corridor leading to the mountainous cities of Jerusalem and Bethlehem. When the two sides finally appear to one another, they dig into their respective sides on the North and South ridges of the valley. Deadlock ensues for weeks.

The Philistines, to end the deadlock, elect to send Goliath of Gath down to the valley floor to challenge the best warrior Israel can offer to individual combat in order to decide the outcome of the greater standoff. Goliath, who stood at an estimated 6’9, is outfitted with brass armor and heavy weaponry.

David, a shepherd boy with a sling used to defend his flock, accepts the challenge. Despite the seemingly uneven odds, David successfully hurls a stone at the giant’s head to bring him tumbling to the ground dead or unconscious. He finishes the job by severing the giants head with is own sword. David is a hero.

For most followers of the David and Goliath story, that’s where the moral of the story ends—Even little guys against all odds can win, so you can, too!

But that popular account of a single event in David’s life doesn’t quite tell the entire story of the man.

David won favor with King Saul after his feat of improbability in successfully wielding a few stones against an armor-plated giant. He was quickly made commander of Israeli forces and, not surprisingly, performed well. For his success in battle, Saul gave David his daughter Michal’s hand in marriage. Upon Saul’s death, David actually became King of Israel, and was supposedly favored by God.

Not bad for a sheep herder from Bethlehem. But David was far from perfect. As king, David abused his powers and the trust of a close friend when he began an adulterous relationship with Uriah’s wife Bathsheba. Uriah, a soldier in King David’s army, was later sent to be killed on the front lines of battle by David in order to conceal his deed when Bathsheba became pregnant.

An accomplished man and even considered to be a prophet in Islam, David was, despite his many achievements, a murderer and an adulterer.

The Bible makes no effort to conceal any of David’s obvious imperfections, he is still perhaps universally regarded as one of the greatest kings in recorded history. Bringing David’s less praiseworthy actions into perspective, two additional truths not mentioned by Gladwell are evident and noteworthy:

King David, star of one of the world’s most retold stories, is a powerful testament to that. The entirety of his life story is one worth remembering, especially when painstakingly examining and reexamining the many times we’ve royally shit the bed. Like the sandy grit that creeps into the shell of a clam to eventually become a pearl, it’s often our failures that provide the ingredients for future brilliance.