The ear-splitting howl of a modified muffler somewhere in the distance provides a fitting soundtrack for this post. While I have no official noise studies to prove this, I’m going to go ahead and say that Malaysia has the highest percentage of modified cars and motorbikes—modified to make them louder.

In addition to all the time and money spent by the automobile industry making vehicles safer, more fuel-efficient, and more appealing to the eye, it’s safe to assume many millions of dollars are spent each year simply trying to make cars and motorcycles quieter. The Toyota Prius, Tesla, and other electric, hybrid, or standard combustion vehicles have become so quiet in fact that it’s become something of a safety hazard for pedestrians who don’t always hear them roaring down the road like other cars. I reckon that’s a pretty good problem to have.

Yet one movie franchise has undone virtually all those efforts towards making streets, neighborhoods, and car rides quieter in some parts of the world. I speak of course of the, shall we say, “painfully-enduring”, Fast and Furious films.

Now at seven films and potentially still counting, one has to wonder how much more noise pollutive cultural devastation it can wreak on the rest of the world. I still remember seeing the first Fast and Furious at our local movie theatre in Arizona. I was 15, just a couple of months shy of getting my driver’s license. It was opening night, and the parking lot was overflowing with cheap-yet-flashy neon-colored cars sporting oversized after-market mufflers. 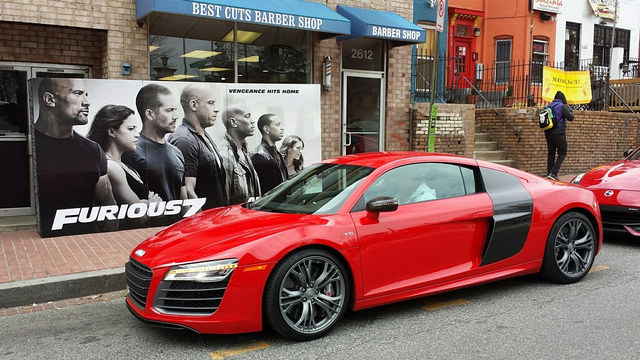 It was as if the first annual convention of adolescent quasi-adults (By date-of-birth, anyway) had just kicked off. A few lingered in the brightly-lit fluorescence of a paved paradise, blasting their similarly modified car stereo systems. Never mind that the bass was cranked up so high the rattle of the cheap plastic outer shell of their vehicles overwhelmed any semblance of instruments or vocals. They were in their element.

Fast and Furious has almost single-handedly convinced the entire world outside the West that Americans spend the better part of their 20s and 30s roaming between various sex-filled block parties and organizing elaborate street races in which the spoils consist of pink slips, cash, or the occasional human being (female, typically).

However, since the majority of the human race can’t afford nor has the time for such nonsensical street recreation, the minimum effective dose to be a member of this esteemed cult seems to be: Make your car as loud as possible.

For a little background on the noise-making device ruining the peace and quiet of too many neighborhoods around the globe, it’s worth remembering a little history.

First of all, it’s not a noise-making device at all. At least until heathens who didn’t get enough attention from mom and dad as kids got their hands on them in shop class. The muffler, first patented by one Milton Reeves of Indiana , is a noise-reducing device. The exhaust from an internal combustion engine vehicle is, not surprisingly, loud and unpleasant.

These days, a still very valuable invention is used by some to command authority where none exists. In other countries, mufflers are modified on the backs of anything from 110CC motorcycles to shoddily-produced death traps masquerading as cars—not unlike Malaysia’s government-assembled Proton cars.

Since those who have the time for this barbaric chest-thumping ritual of the automotive kind usually lack the financial resources that come with a stable job, the speed and performance of said vehicles usually doesn’t match the big sound they produce. In short, they’re all bark and no bite. While the sound of the vehicle screaming down the road alerts the observer, “Danger, high speed machine approaching”, the depressing sight is typically that of a rusted heap of metal lined with LED strip lights and straining to not blow a gasket at 45MPH.

While it might sound funny—and in a pathetically miserable way, it is—it’s also an incredible nuisance. The larger story here—one that I may elaborate on in the future—is that American (and Western) pop culture has an incredibly powerful and far-reaching impact. What we Americans sometimes laugh about and poke fun at, others around the world take seriously as accurate representations of the Western lifestyle.

Hollywood is in many respects America’s favorite whipping boy. Whether for political or social reasons, a lot of people despise the “Hollywood” lifestyle and the culture its movies promote. We see every movie through a self-imposed filter that reminds us, “This is a movie. And these kinds of things don’t actually happen.”

The rest of the world doesn’t have a learned aversion to the Hollywood culture. Having not experienced life in the faraway land that is America, they often take movies at their word and assume the filmed representation of Western lifestyle is an accurate one. It’s usually not.

If violence, depression, suicide, and drug use in America aren’t enough to convince writers and directors to be careful about what they put out into the worldwide cinematic ether, I doubt the misbehavior of foreign-born adolescents will change that.

Nevertheless, it’s worth recognizing that we don’t exist in a bubble anymore, and what we produce from a cultural standpoint has a lasting effect on our image abroad.