Living in rural Malaysia makes you appreciate the heavenly manna that is pork. Cambodians eat a LOT of pork. So right off the bat they’re on my good side. Their traditional breakfast (picture below), is rice with pork strips on top and a small spicy cucumber salad. Or you can try to pronounce Bay Sach Jruk. Good luck. Yes, it is excellent. A very simple dish, but they know how to cook their pork. 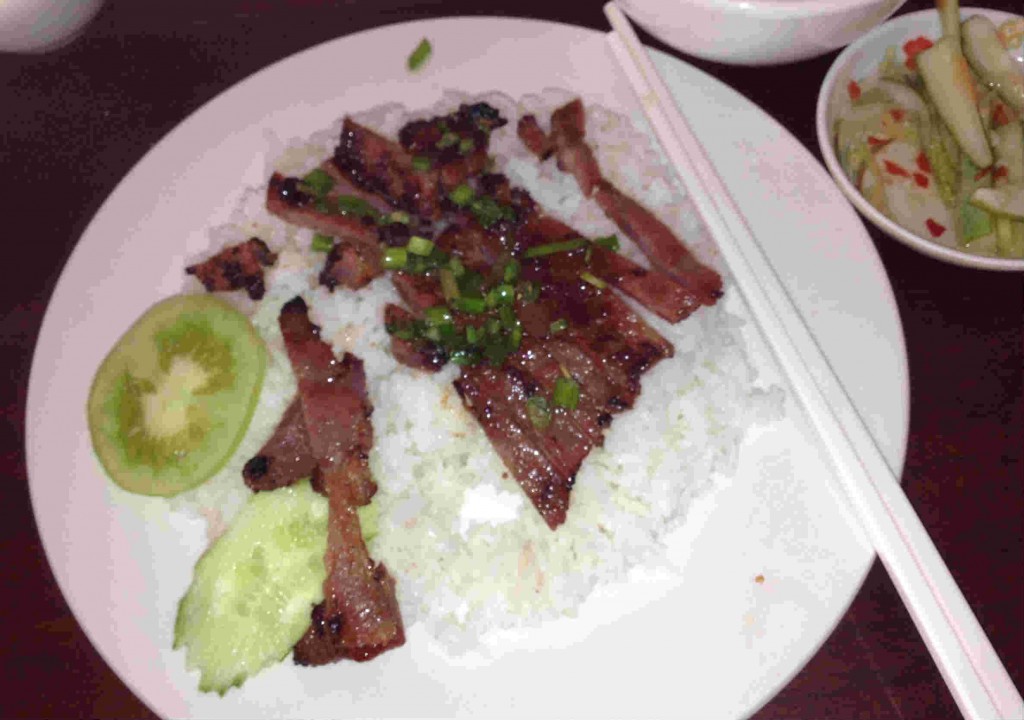 Fresh fruit is in abundance, and you’re practically tripping over mangoes wherever you go. The country has a subtly fragrant smell, to which I attribute the burning Buddhist incense all over town, and perhaps the abundant mangoes. You can pay for most things with American dollars, which I believe makes tourists stingier—it does for me. Imagine cashing in your poker chips at the casino and asking to play with your own, real, paper money. I’d be willing to bet most people wouldn’t play so fast and loose if it was their own hard-earned cash on the table. Using foreign currencies is a little like using poker chips, somehow it seems like a fun game until you realize you’ve just been taken by the house.

Cambodia is abhorrently poor, and you cannot go anywhere without street kids begging you for a dollar. This is the first time I’ve seen the majority of beggars be kids instead of adults. In Siem Reap, girls as young as 8 carry around infants (brothers, sisters, cousins) with an empty milk bottle, telling foreigners passing by “I don’t want money I just want milk”, then they grab your finger (a nice touch) and take you over to the nearest convenience store to buy baby formula. When I realized this was a scheme of some sort, I started asking one of the girls how it worked. She said they’d work until about midnight, empty milk bottles in hand, and when they got some sucker to buy formula they’d sell it back to the shop at about 40% cost. 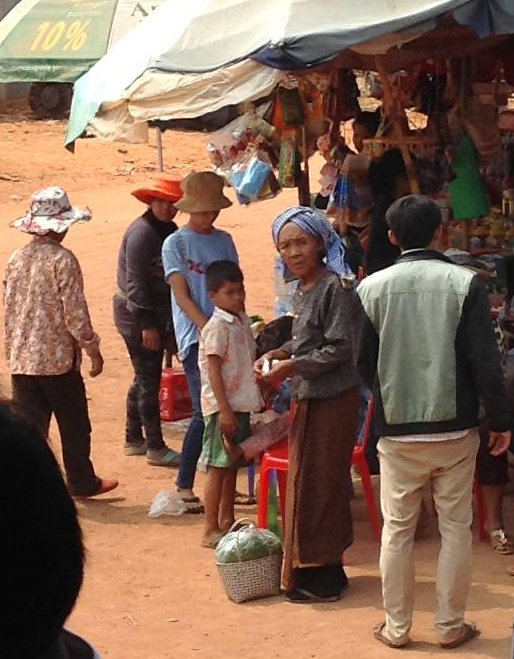 This is a symptom of command economies I’ve seen across Asia. Rather than work to produce something of value, it’s much easier to just devise a scam of some sort where one person (the scammer) wins and the other person (the scammed) loses. Freedom to work and run a business is blocked at every corner by the central planners in government. Business licensing in Cambodia can often take more than 500 days according to one economic index. Unfortunately, it seems that economic policies in Cambodia today aren’t much different from the policies of the Khmer Rouge when they held power.

Another small anecdote about the economic system. Tuk tuks are essentially motorized rickshaws and are the primary form of transportation for tourists and even locals who can afford them. I hired one to take me just about everywhere when walking was out of the question. Accordingly, I hired one to take me from my hostel in Siem Reap to the entrance of Angkor Wat. This time, a flat rate to be my personal temple-hopping tuk tuk for the day. 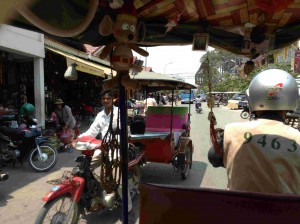 Once we arrived, I paid the driver and thanked him but decided to find a group of fellow Westerners with whom I could split an actual air-conditioned cab (the heat was unbearable). He was free to go on his way with a day’s worth of Cambodian riel in his pocket before the clock struck noon. I quickly found a friendly group with an empty seat in their cab to fill and I was thrilled at the thought of cooling off with the AC between temples.

But when they informed their driver that I would be joining them, his face instantly showed fear. He noticed I just stepped out of a tuk tuk and said I couldn’t come because I already had a driver and he could be reported by the government for stealing the other man’s business.

I said it was no problem, I had already paid the tuk tuk driver for the day, and all debts were settled, he could now go on with his day and find business elsewhere or take the rest of the day off. Even after explaining that, he wouldn’t allow me to go with them for fear of some form of anti competition law in Cambodia.

Heartbroken, perplexed, and on the verge of heatstroke, I walked my greasy, sweat-drenched self back over to my original tuk tuk, and carried on with wasting his day as my personal driver.

I wondered to myself, what message does this send to tuk tuk drivers in Cambodia and anyone else trying to run a business? To me, the message can be boiled down to: “Don’t bother innovating, don’t you dare try to impress, don’t ever go above and beyond because if you do, you will be made to account for your transgression for threatening the business of your rival.” And so the result is: zero innovation, stagnant wages, a glaring gap between rich and poor (if you aren’t riding a bicycle or a broken down motorbike in Cambodia, you drive a Lexus SUV or Range Rover—the contrast is head-spinning), and heartbreaking poverty.

Continuing with the poverty theme, people sleep everywhere. Construction workers sleep on the sidewalk outside their construction sites with the rats and the roaches, and if they’re lucky they have a mosquito net covering them. Dengue fever is a big problem in Cambodia.

Tuk tuks are everywhere. Most short rides cost an American dollar or maybe two. I saw many drivers sleep in their tuk tuks, usually in a hammock that they hung from either side. 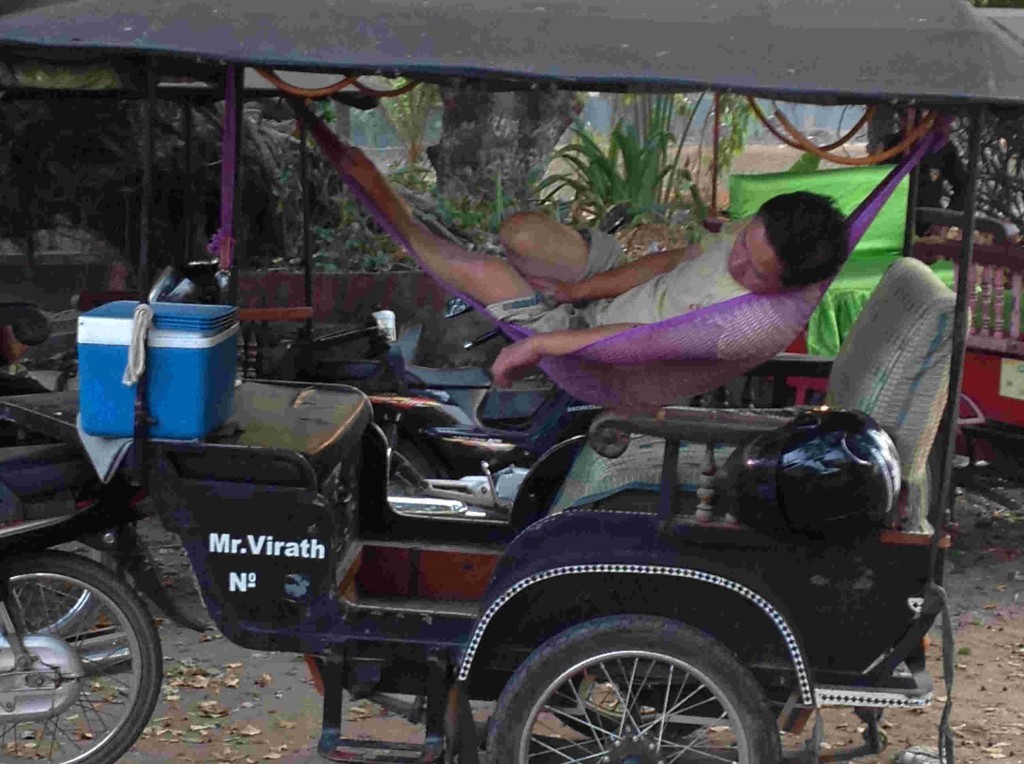 While all the poverty is depressing, I greatly admire the spirit of the Cambodians. Their hospitality is world class, and they go to great lengths to take care of their guests. In my limited interactions with them, Cambodians seem very comfortable in their own skin, something I think is lacking in most Asian countries, and certainly in Malaysia. They seem to embrace their culture, and don’t try to be something they’re not. The great Khmer culture endures.