Droughts in the land occupying the space between the 1850-drawn borders that today we call California are nothing new. Anyone who says otherwise is either uninformed or under the influence of an agenda. Armed with a measly 163-year old rainfall record, some are quick to reason that California’s most recent and widely published drought is the result of our own post-industrial revolution vices. They are dangerously wrong.

California is an enormous swath of land. Were America’s original organizers alive to see her today, they’d probably consider it an unwieldy and ungovernable mass. And with water a growing concern, it very well may prove to be such. 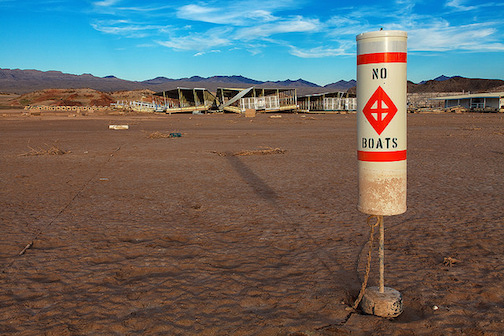 At a whopping 163,695 square miles, California is six times larger than the average size of one of the original thirteen states. Not unlike Texas, its size and relative autonomy are a direct result of its powerful pre-statehood status. California, in the midst of a gold rush, was in demand. In the two years following the discovery of gold in California, over 100,000 people poured into the would-be state. The U.S. government was at risk of watching California become it’s own separate country.

With considerable leverage at hand, California drew its own boundaries liberally to incorporate the gold-rich Sierra Nevada mountain range and the all-important Colorado River that gives California’s southeastern border its shape.

California’s current dry spell is at about three years and counting and while it’s been a struggle, it pales in comparison to previous periods of drought. The historical record suggests things may not be getting better anytime soon for the parched state.

Tree ring and sediment analysis reveal multiple periods of prolonged droughts in the past 1,000 years in California—not the 3-4 year kind, but 10 or 20 years, rather. Here’s hoping that’s not the case this time around, but who can possibly know what lies ahead?

Price-controlling the most precious of commodities

That price controls lead to shortages is both painfully obvious and extraordinarily difficult for bureaucracies to appreciate. California is, in an age of literal water scarcity, playing with proverbial fire.

For starters, it is home to a dizzying array of more than 50 different water utilities. As government-sanctioned and competitively-protected monopolies, these utilities are virtually guaranteed customers and income, regardless of performance. Innovation, raising prices to meet demand, or otherwise conserving the lifeblood of California are all peripheral (to use a generous adjective) concerns for a corporation without a competitor or a care in the world.

Ostensibly an effort to ease the plight of the poor, California’s water subsidies have made it possible for the wealthy elite to turn desert landscapes into lush tropical yards complete with swimming pools and cascading fountains—without actually paying the true cost.

As a result, water in California is underpriced and even more under-appreciated. Soon, it may be so far under the soil that Californians will have to resort to the ocean as their next source of water to waste. A billion dollar desalination plant is reportedly set to open later this year to supply San Diego County.

Complicated New Deal-era price supports of government-favored crops and subsidies to encourage planting of ethanol-producing corn and sugar cane (That’s burning food for fuel, for the layperson) further exacerbate the problem of California’s all-too-cheap water supply. Intoxicated by federal farm subsidy largesse, California has long since moved all-in on food production. H20-guzzling crops like pistachios and almonds are almost exclusively sourced from California. An incredible 99% of all American walnuts are produced in the state.

Today, agriculture consumes a staggering 80% of California’s developed water resources, which makes rationing people’s dishwashing water seem more than a little silly. Amounting to a mere 2% of of the state’s total gross domestic product as farms do, it may be time to reconsider the return-on-investment for the current incentives scheme to encourage growing crops in a desert.

Assuming best-case scenarios on all fronts for California’s water supply including reliable desalination plants, improved behavior and innovation from utilities, and letting prices rise to a natural equilibrium, the state still faces an uncertain future.

Absent introducing real market forces to accurately price water and predict its rate-of-consumption, California will continue to deal with water scarcity in the face of insatiable public demand for a resource too often taken for granted. That does not mean politically-connected backroom deals for corporate goliaths like Nestle, because there’s nothing remotely free market about that. But it does mean allowing creative individuals the ability to responsibly compete with one another for the opportunity to provide Californians with clean, affordable, and renewable sources of water. Absent real-life angels managing California’s water supply from on high, there simply is no other way.