There are six citrus trees in the backyard of my childhood home. I remember one hot summer day as a young kid going out to repaint the white trunks of the trees. The white paint increases the albido (the ratio of light reflected off an object) and thus keeps the trees cooler. The fruit was not yet ripe, so the tree leaves and unripened fruit were all a uniform green at the time.

As I crouched down underneath one of our orange trees, I was shocked to see a bright yellow lemon dangling from a small branch amidst all the green. I ran inside to tell my dad about the Summer Solstice miracle that had taken place right in our own backyard.

“Oh,” he said calmly, to my obvious disappointment. “Well those orange trees were grafted onto lemon stock.”

That didn’t mean much to me at the time, but I later learned that most citrus trees are actually grafted onto a different type of rootstock to take advantage of a particular species’ ability to resist disease or produce a higher quantity of fruit, etc. As a result, it may on occasion shoot off a branch that produces fruit of the original rootstock.

Little did I know that my dad was one of the evil geniuses behind a growing trend toward genetically modified organisms (GMOs) in our food supply. In addition to “playing God” with that orange tree, we also had a tangelo tree—a cross between a tangerine and an orange. They’re delicious, juicy, and easy to peel in all their genetically modified heresy.

Some years before the “lemon incident”, I was taken into a doctor’s office and pricked with a needle. My mom was one of the first to learn about the new varicella (chickenpox) vaccine and was eager to use me as a guinea pig. To this day, one of my favorite and surefire ways to shock people is to tell them that I’ve never had chickenpox. To my peers, no one escaped childhood without getting chickenpox. It’s an airborne and highly contagious disease that was practically a youth rite of passage until the vaccine was popularized.

I was too young at the time to know my mother was an evil shill of “big pharma” intent on poisoning my blood for some unknown personal gain, but now the truth is all too clear.

I’ve never been a big fan putting the word “anti” in front of any nouns. It seems to me that there are very few things worth being 100% anti about 100% of the time. Plus, the word has so many negative connotations: Anti-Semite, Anti-Chinese, Anti-Christ, Anti-union, Anti-immigrant. Apart from antipasto and antioxidants, I try to leave the word “anti” firmly out of my vocabulary.

These days, both sides of the political aisle have got any number of “anti” movements moving full stream ahead at all times. Anti-vaxxers (vaccines) and Anti-GMOers (genetically modified organisms) are two of the most colorful and loud of these delightful groups.

Ironically, they typically come from opposite sides of the political spectrum. One group seems to believe that corporations are out to profit from poisoning and monopolizing our food supply through GMOs. The other thinks the government is using us in some mad scientist experiment to see what happens when enough lead and mercury is pumped into our veins.

The truth is, vaccines and GMOs have been around for longer than most people give them credit, and so have their opponents. Even when the smallpox vaccine was discovered in the West in 1798 by Edward Jenner, several countries in Europe moved to ban the procedure. Alfred Russell Wallace, co-founder of the theory of evolution with Charles Darwin, famously said that vaccinations are “a giant delusion… never saved a single life.”

In China, successful vaccinations stretch back to at least the Ming Dynasty in the early 1500s. More recently, vaccines have nearly eradicated polio—a debilitating disease dating back to the time of the ancient Egyptians. They are not modern inventions of some evil corporate-government alliance.

For GMOs, human beings have been genetically modifying plants and animals for only about the past 14,000 years. American Indians from the Wampanoag Tribe  are credited with helping the Plymouth Colony survive in part by sharing their knowledge of cross-breeding various crops. You might know this as the Thanksgiving story.

Try as you might with your “ancient” super grains like kamut and quinoa, you will never be able to rid GMOs from your diet completely. Even your favorite four-legged friend wandering around your house whether it be a cat or dog is a genetically modified organism, bet on it. Who’s playing God now, sister?

GMOs and the poor

Maybe it’s not such a bad thing for us to do all this playing God when the result is generally to improve the lot of human beings everywhere. Uganda is among the poorest nations in the world, but one thing they have plenty of are bananas. Ugandans eat on average about one pound of bananas per day. But in 2001, bacterial wilt disease began to devastate the crop, and no amount of pesticides was able to keep the disease at bay.

Scientists from the Ugandan National Agricultural Research Organization eventually created a genetically modified disease-resistant banana by inserting a specific gene from green peppers into the ordinary banana genome. While the breakthrough could save Uganda’s banana crops, opposition from scientifically thin anti-GMO groups have prevented its use. 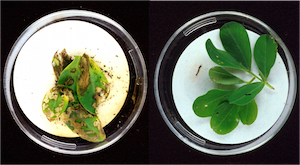 In other regions, it’s believed that genetically modified strains of rice designed to have more vitamin E could prevent blindness in some people.

Admittedly, there probably are some harmful side effects that go along with getting a vaccine. I for one have never seen the logic of allowing some stranger to inject a mysterious concoction into my arm once-a-year just so I can supposedly avoid the flu. In fact, if I’m getting the flu every year, my problems probably run deeper than my flu shot is capable of curing.

And hey, natural is always better. I avoid the processed foods as much as I can and if it ain’t broke, don’t fix it with a gene modification. I like my chia seeds and spelt just the way they are, thank you very much.

While I’m not a big fan of being anti-this or that, I respect everyone’s right to be anti-whatever-paranoid-fear-you-can-conjure-up, just don’t ask me to hop aboard your crazy train. If you wish to avoid GMOs and vaccines like the plague, have at it. But it’s not fair or logical to embark on political campaigns that force everyone else into your little box with arcane and antediluvian laws banning GMOs (read: all food everywhere).

If a cafe doesn’t meet your standard of reasonableness in purging its shelves of GMOs or painstakingly identifying them for your viewing pleasure, vote with your feet and find a new place to get your morning bagel. Or start your own cafe, and pay the lab to do the research on your food to be sure it’s properly labeled GMO or non-GMO. If you’re right and GMOs turn out to be the unholy killers you believe them to be, you’ll get rich and be the town hero.

Likewise, if an infectious disease is terrorizing the neighborhood and you think the vaccination program is a secret government plot to install a microchip in your child’s arm, try homeschooling. Better yet, start your own private school with fellow anti-Vaxxers—now that’s entrepreneurialism.

In the meantime, there’s a lot of poor people being helped by the GMOs you detest and the vaccinations you revile. So if you must make a scene with every vaccine program or spliced rootstock, please, do it on your own dime.