Music has the power to move people in ways few mediums can. A sad song can be a repository for heartache. A happy one a soundtrack to add rhythm and cadence to our already positive vibes. Often, music simply puts into form the things our souls bear that are otherwise formless. There is a level of intimacy with music that is seldom replicated even between two human beings.

And yet, the artists creating our most cherished songs tend to be perceived as separate and apart from their music. The fame and wealth that come with the territory of being successful in the music industry often make artists unrecognizable from their better sides expressed in song. 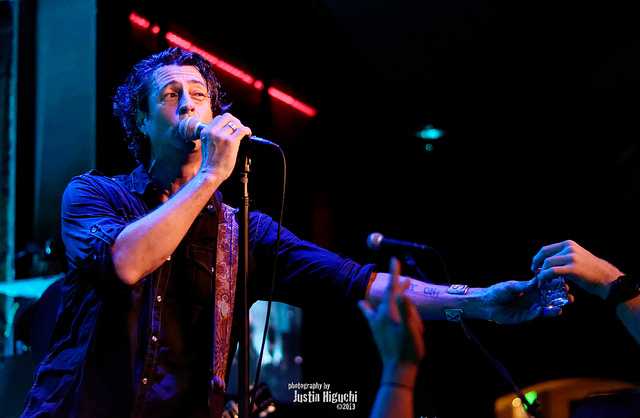 Something missing in the music

As a result of that disconnection, live performances sometimes fail to reach the high expectations of experiencing in person the artists we love in stereo. Concerts can seem very formal and business-like, when what we really want is personal and intimate.

At concerts, musical sets by favorite bands can seem to be over before they really began, often lasting only an hour or maybe two before the group signs off for the night.

It all can seem very anticlimactic for the diehard fans who had the concert marked on their calendars for weeks or months as the anticipation built up. They’re left to walk away with a little less cash well before the night is over in their minds, wondering what to do next and why the band didn’t play their favorite song.

For Roger Clyne and the Peacemakers, connecting with fans on albums but not during live performances doesn’t cut it. The pride of Arizona, RCPM seems to thrive on the principle that bands should be who they are in song and in deed. In a one word cliche: Real.

Pound for pound, I’d say Roger Clyne and the Peacemakers measure up against any band in the world in number of devout followers. So how do they do it?

Basically, RCPM practices amazement in every facet of interaction with its followers. From the moment a fan puts on headphones to check out their latest album until the time they’re swaying in the pit to Green and Dumb.

A man of the people

The guys in RCPM perform like equals with their fans. They are the least pretentious international rock stars anyone could ever hope for. Because of that, the feel of an RCPM concert, no matter how big the venue, is like watching a few old friends jamming in your backyard. It’s as if they do it, not because you pay them well to play at your backyard barbecue, but because the food is good and the people are friendly.

Of course, making good music does pay well. But Roger and his gang have no problem accepting payment in the form of a little adult liquid refreshment. If you’re enjoying a few libations (responsibly) at an RCPM concert, and you get close enough to the stage for Roger to take a pull, chances are he’ll do it if you offer. What kind of band not only throws a few back at a concert, but does so while involving their fans? An amazing band.

Getting what you paid for

There is nothing about an RCPM concert that breaks the bank. In fact, they put on a free show at their hometown Arizona Diamondbacks’ games every season.

It seems almost no venue is too small for RCPM. They go where they’re wanted, and that’s a lot of places. You’re just as likely to see them for a $20 cover charge at a local bar as you are to see them headlining one of their larger venues, like Chase Field in Phoenix.

Or at least, pretty close to when you’re about to stop. An average RCPM song set lasts 3 hours. That’s basically playing over three full albums in their entirety, with hardly a break in between. If you go see Roger Clyne and the Peacemakers, there’s a very good chance you’re going to hear your favorite sing–even the slightly more obscure ones.

Roger and his bandmates are so committed to putting on a great show and giving you what you paid for that almost nothing can stop them from coming on stage. At Circus Mexicus 2014, Roger damaged his vocal chords early on in the set. Even speaking to the crowd without his voice giving out occasionally was difficult.

Instead of calling off the show to take care of his chords, Roger apologized, went backstage for a few minutes to find a quick remedy, and came back out on the stage to continue the show. In typical RCPM fashion, they didn’t stop until their promised three hours were up.

Because Roger and the guys have been producing hit songs since the mid 90s, it’s easy to assume that his concerts might be full of middle-aged people with few young or old fans. But in fact, an RCPM concert is one of the strangest generational mixers you’ll ever come across. Young people in their teens can be heard at concerts singing every lyric to their oldest hits. Even older fans who didn’t grow up hearing RCPM have learned to become fans and followers. People just know good music when they hear it, old or young.

Of course, Roger Clyne and the Peacemakers is a business. But business doesn’t have to be a win-lose proposition like it is for some bands. Some businesses manage to regularly give their customers an experience they’ll never forget by going beyond what’s expected for the money paid. RCPM connects with its fans, The Peacemakers, on a human level like few other bands can or will.

In many ways, RCPM embodies what Shep Hyken, a well-known customer service expert, calls the The Amazement Revolution. It’s something we should expect more businesses to practice, in the music industry or elsewhere. Doing so is really the only surefire way to succeed in today’s uber competitive marketplace, and that’s a good thing.

Every industry could use a little more humanity, and the truth is, it’s good for business. But for now, the music industry has a pretty good Amazement mentor in Roger Clyne and the Peacemakers.