Before I ever stepped foot overseas or even had much of a desire to travel very far, I was forced to watch the film adaptation of the book The Ugly American. I had enrolled in a political film class (huge real-world value there..) at Arizona State University and The Ugly American was probably the film I least looked forward to on the semester’s schedule.

Truthfully, I didn’t know much about it but given when the movie was made and the not-so-subtle political bent of this particular class, I knew I was in for some good ole’ fashioned America-bashing. Which isn’t always undeserved, but I was getting lethal doses of it on a daily basis.

Not going in with an open mind at all, I of course came out of the movie unhappy. “There’s no way Americans abroad would act that way,” I thought to myself. It just didn’t make sense. I didn’t know anyone who would behave like that. We had plenty of immigrants at our school and no one treated them with anything but the utmost respect from what I saw. I didn’t see any reason why that would suddenly change if we were on their home turf.

And then I went overseas

Conclusion? Some Westerners who go overseas are certified jerks. That goes for Europeans as well. For too many Westerners abroad, the drunken, loud, disrespectful stereotype rings true. I’m not saying it’s 100%, I’m not even say it’s a majority of Westerners, but it only takes a few bad apples to spoil the bunch in the eyes of a non-Westerner.

You might be able to say to yourself, “But not everyone in the West is like that, I know because I live there.” Well guess what? They don’t live there. So the jerks are all they know.

In the novel, this phenomenon is detailed with amazing if not depressing accuracy: ”For some reason, the [American] people I meet in my country are not the same as the ones I knew in the United States. A mysterious change seems to come over Americans when they go to a foreign land. They isolate themselves socially. They live pretentiously. They are loud and ostentatious.”

(You can insert “Westerner” and “The West” every time it specifies Americans or America because it applies to more than just the U.S.)

So when you travel, travel well. Whenever possible, conduct yourself as if you’re at Grandma’s house and you’re all too familiar with Grandpa’s belt. When in doubt, here’s five rules to live by: 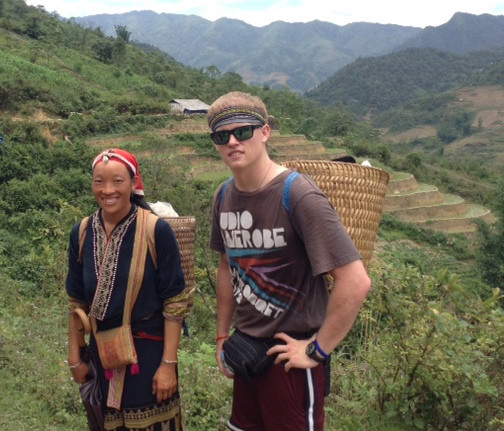 With the locals in Sapa, Vietnam.

Without a doubt, go see the world. It will enchant you beyond your wildest dreams. Follow just a little bit of my unsolicited advice, and you’ll make human connections in faraway lands that will last a lifetime. Count on it.

To quote Mark Twain, “Twenty years from now you will be more disappointed by the things you didn’t do than by the ones you did. So throw off the bowlines. Sail away from the safe harbor. Catch the trade winds in your sails. Explore. Dream. Discover.”