There is something uniquely American happening in the fast food burger world. In the past 5+ years there has been an absolute explosion of choices for the consumer when it comes to eating America’s most identifiable delicacy.

The best part? Just about all of them are a vast improvement on our previously limited burger options of the past 50 years. Sure, most of them are a little bit more expensive than what we’ve become accustomed to paying for burgers, but the quality seems to have more than kept pace.

Naturally, McDonald’s and the other old kids on the block are struggling to keep up with their new competition. McDonald’s stock growth has slowed to a snail’s pace compared to the rest of the S&P 500, and they’re trying out all sorts of new ideas to jumpstart business, not the least of which are some radical menu changes.

As a guy who opens the refrigerator door to look at food even when I’m not hungry—just for the fun of it, I call it window shopping—I think I have a few ideas for how McDonald’s can rekindle the fire with its customers. So let’s get started:

I know we’re all supposedly on this diet craze of eating a lower quantity and higher quality of food, and I’m all for that. But I don’t go to McDonalds, Five Guys, Habit Burger, etc. to accomplish that. And I don’t think any other sane person is, either.

When I go to those places, I am splurging. Binging, you might call it. I want and fully expect to be mildly uncomfortable from overeating when I leave those places. Call me a masochist, but I bet you do, too.

Somewhere along the line, McDonald’s stopped trying to make us supremely stuffed with every meal. I’m not proud to admit this, but I just purchased a Big N’ Tasty meal at the McDonalds on a beautiful beach here in Malaysia (easily the most beautifully-located McDonald’s I’ve ever been to). In fact, I even pulled out an extra ringgit or two in order to get the “large” size. 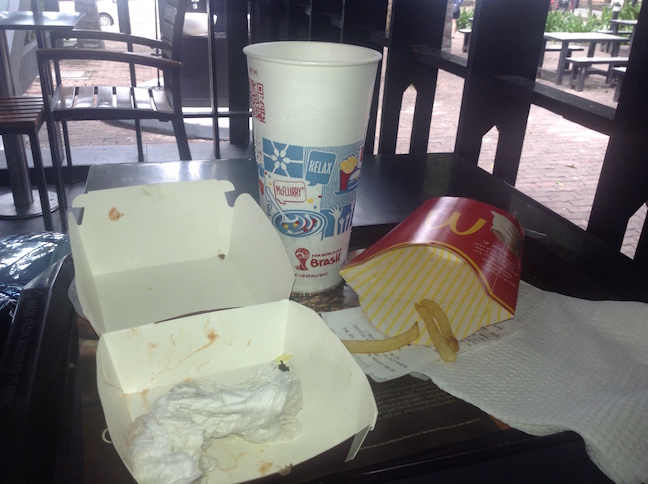 It was “tasty”, to be sure, and the staff behind the counter were friendly and patient as I weighed the myriad halal options in front of me. But when I finished, I was still hungry. Not like a few extra french fries short hungry, but another Big N’ Tasty with a few McNuggets hungry. “Super size me” as it was formerly known. So don’t judge me, but I got another meal (it was a Big Mac if you have to know). But that turned out to be too much food, and made me feel like I should punish myself.

When I go to Five Guys, Habit, Steak ‘n Shake, or any of the other big new burger chains, I never leave hungry. In fact, I can almost never finish the pale of french fries that Five Guys heaves onto my tray. And it’s not that I’m ordering an extra meal at those places either. Their standard fare is just doggone large. Enough for a 175 pound male on a food binge and then some.

Here’s the thing, though. There’s no question I’m paying more for the burger and fries at the new burger joints than I would at McDonald’s, even if I order a supplementary McNugget or fries. But because we’re all “consumer suckas” (as my good friend Mr. Money Mustache likes to call it) to some degree, the psychology of paying for a meal and then something else on top is simply too much to bear. It’s easier for us to rationalize spending a little more on one filling meal than it is two buy a meal and then something to supplement.

Today’s splurge was a once-in-a-blue-moon, shameless move by me because it’s been so long since I’ve had McDonald’s, and because foreign currency feels a little too much like Monopoly money to me. In the U.S., and on almost all other occasions at McDonald’s, I buy one meal and walk away hungry.

So, political correctness be damned! It’s time to up the portion sizes, Mickey D’s!

It may seem hard to believe, but I would argue that one of the most crucial elements for developing customer loyalty is for customers to regularly see happy employees.

I admit, while Habit makes some incredibly tasty burgers, I’d still go there if the quality was just on par with some lesser burger chains, because I always feel better when I’m there. I don’t feel like I’m watching slaves laboring at a job they hate. I feel like I just crossed the street to grab a burger at my friend’s barbecue, and he’s having just as much fun as I am. Habit Burger’s employees are friendly, happy, and are even dressed like normal human beings.

Happy and fun employees can be accomplished in a number of different ways. Some are obvious—higher wages helps. But even something as simple as a fun, casual uniform can do wonders for the level of fun and self-confidence at a company. Sure, McDonald’s’ uniforms have gotten a little better over the years, but they’re still pretty dorky and subservient-looking.

There’s a restaurant not far from where I currently live where hostesses are forced to stand out front in absolutely horrendous-looking “sailor” uniforms trying to get people to come eat seafood. They look miserable. But even if they were good enough actresses to look like they were enjoying it, I’d know deep down that they were embarrassed and uncomfortable.

I will never go to that restaurant based on principle—I don’t like the way those hostesses are treated. But it also just makes me feel uncomfortable when I know the people working for my money are uncomfortable. They could stand out there in those uniforms offering free meals, and I still wouldn’t ever enter the place. Sometimes when I pass by I think about going in and asking for the owner so that I can either slap him or give him some free business advice, but neither of those things are likely to pan out well for me.

Like I said before, quality is king these days, and a growing number of us can afford to be incredibly picky because we have so many new options. If we have to pay a little bit more, we will.

McDonald’s has incredible loyalty that spans the globe. But it’s more nostalgia and brand-recognition-based than quality-based. It tastes good, and there’s no doubt I had fun scarfing down two McDonald’s meals a few moments earlier, but McDonald’s’ incredible growth rate over the decades hasn’t exactly been a result of increased quality.

But could it be for future growth? Without question. I defy anyone reading this to tell me they wouldn’t at least “try” a revamped McDonald’s menu that included a “McPlatinum” line of burgers (You’re welcome, McDonald’s). You know, burgers with a little girth, flamed up right before your eyes, with premium toppings like fresh jalapeños, creamy avocado, or some spicy Sriracha sauce. My mouth is watering just writing about it. And I’d shell out an extra dollar or two to get it a lot faster than I would to buy a second meal or side dish.

For those who want the traditional McDonald’s food at the usual price—by all means, enjoy. Everybody wins.

McDonald’s will probably remain a household name long after we’re all gone from this earth, but if they adopted these three changes, or even just one, they just might seriously compete with the new kids on the block.

Just don’t change the fries. Those are already McPlatinum.

P.S. I’d like to give some love to a hometown favorite of mine that should also be a BIG part of this Burger Revolution: The Stand Burgers & Tacos. If you ever find yourself in Phoenix, AZ, give ’em a go.